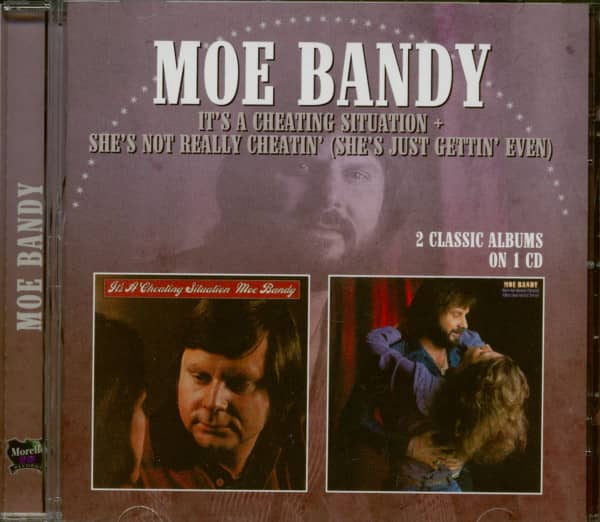 Unfaithful lovers have always been a staple subject for country lyrics, a fact Marion 'Moe' Bandy underlined when he named these two albums from 1979 and 1982.

They're a reminder of what a fine storyteller he is, and backed up his assertion that 'my songs are about life. There's cheating, drinking and divorcing going on everywhere and that's what hardcore country music is all about.'

The albums came at a point when he was gaining equal attention for his double act with Joe Stampley. The Number 1 country-chart success of their tongue-in cheek single 'Just Good 01' Boys' encouraged Moe and Joe (as they were inevitably billed) to continue the pairing in parallel with their own solo careers, a link that brought them novelty hits from 1979 through to the mid Eighties. But it was a different pairing, with Janie Fricke, that made the title track to it's A Cheating Situation' so appealing. It shot to Number 2 in the US country singles chart, paving the way for Bandy's one and only solo chart-topper, 'I Cheated Me Right Out Of You', later in the year. That would appear on his next album, 'One Of A Kind'; single two from 'It's A Cheating Situation' was the Number 9 hit 'Barstool Mountain'.

The 'Cheating Situation' album made Number 19, Bandy's best showing (disregarding his Moe and Joe side trip) for a couple of years. His career was already nearly two decades advanced, having started in 1962 as frontman of Texan bar band Moe and the Mavericks. After recording for the small GRC label, he won a solo contract with mighty multinational Columbia in 1976 and began racking up sales and critical accolades, being hailed as a bar-room balladeer in the tradition of Hank Williams and George Jones.

The Seventies was a decade when country went pop with Kenny Rogers and John Denver, while the likes of Waylon and Willie offered a funkier outlaw alternative. Delivering traditional Texas-style honky-tonk music with twin fiddles and a steel guitar, Moe Bandy was less than fashionable. By 1979, it seems, the world had caught up with him.

$17.01 $19.45
Customers also bought
Customers also viewed
It's a Cheating Situation - She's Not Really Cheatin' (CD)
Tracklist
Bandy, Moe - It's a Cheating Situation - She's Not Really Cheatin' (CD) CD 1
01 It's A Cheating Situation (Backing Vocal Janie Fricke)
02 Barstool Mountain
03 Cheaters Never Win
04 Conscience Where Were You (When I Needed You Last Night)
05 Try My Love On For Size
06 To Cheat Or Not To Cheat
07 She Stays In The Name Of Love
08 It Just Helps To Keep The Hurt From Hurtin'
09 When My Working Girl Comes Home (And Works On Me)
10 They Haven't Made The Drink (That Can Get Me Over You)
11 She's Not Really Cheatin' (She's Just Gettin' Even)
12 He's Taking My Place At Your Place
13 Can I Pick You Up
14 Hank And Lefty Raised My Country Soul
15 The All American Dream
16 Only If There Is Another You
17 Our Love Could Burn Atlanta Down Again
18 Your Memory Is Showing All Over Me
19 An Angel Like You
20 Jesus In A Nashville Jail
Funktionale