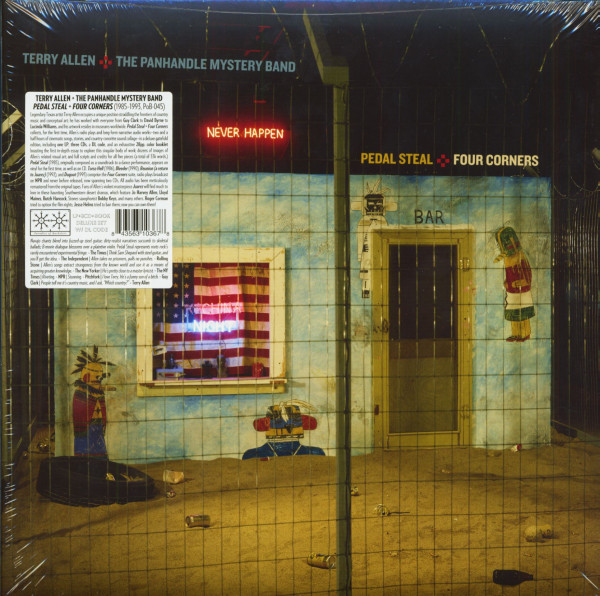 Please inform me as soon as the product is available again.
$35.19 *

Terry Allen: ''People tell me it's country music, and I ask, which country?'' -

Legendary Texan artist Terry Allen occupies a unique position straddling the frontiers of country music and conceptual art. He has worked with everyone from Guy Clark to David Byrne to Lucinda Williams, and his artwork resides in museums worldwide.
Pedal Steal & Four Corners collects, for the first time, Allen's radio plays and long-form narrative audio works—two and a half hours of cinematic songs, stories, and country-concrete sound collage—in a deluxe gatefold edition, including one LP, three CDs, a DL code, and an exhaustive 28pp. color booklet boasting the first in-depth essay to explore this singular body of work, dozens of images of Allen's related visual art, and full scripts and credits for all five pieces.
Pedal Steal (1985), originally composed as a soundtrack to a dance performance, appears on vinyl for the first time, as well as on CD. Torso Hell (1986), Bleeder (1990), Reunion (A Return To Juarez) (1992), and Dugout (1993) comprise the Four Corners suite, radio plays broadcast on NPR and never before released, now spanning two CDs.
All audio has been meticulously remastered from the original tapes. Fans of Allen's violent masterpiece Juarez will find much to love in these haunting Southwestern desert dramas, which feature Jo Harvey Allen, Lloyd Maines, Butch Hancock, Stones saxophonist Bobby Keys, and many others. Roger Forman tried to option the film rights, Jesse Helms tried to ban them, now you can own them!

Singer/songwriter/pianist born in Lubbock, Texas in 1943.  His debut album, 'Juarez', was released on the Fate label in 1976.

Album recorded July-August 1980 at Caldwell Studios, Lubbock, Texas.  All songs are by Allen except this one – probably the most unusual version ever of this Berry classic.  It starts off with a self-composed ditty, 'Whatever happened to Jesus and where did that good ole boy go?' (plus a few more lines), followed by 'Whatever happened to Mary? Whatever happened to her sweet dreams? Did she leave them behind with her childhood or just trade 'em in on a tube of Maybelline? Ahhh, Maybellene why can't you be true...' and so on.  I like that.  Allen really did make his own unique version of the song without copying anyone else!