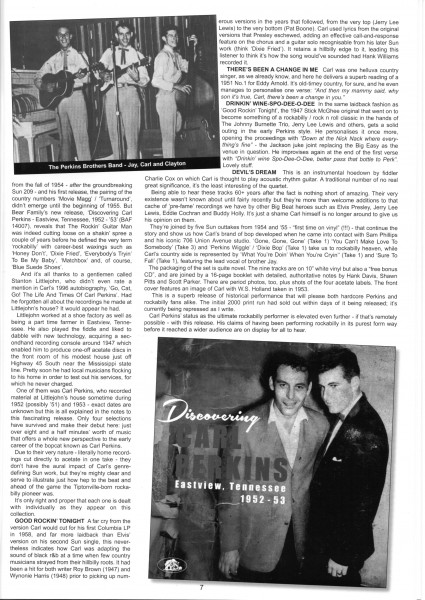 "Carl, listen to this! Listen! They play just like y'all!" So exclaimed Carl Perkins' wife, Valda. upon first hearing 'Blue Moon Of Kentucky', the initial release on Sun Records by Elvis Presley with Scotty & Bill in the middle of 1954. "His style is a lot like mine", Carl agreed. After hearing the other side of the record, 'That's All Right', he told Valda: "There's a man in Mem-phis who understands what we're doing. I need to go see him." Carl and his brothers, Jay and Clayton, had been regular performers at the honky conks around Jackson, Tennessee since the late '40s, entertaining the crowds at venues like The Nick Nack Cafe, The El Rancho, The Roadside Inn, The Sand Ditch and The Cotton Boll Club. These were rough 'n' ready watering holes where working men relaxed after a hard day's graft - often finishing the night off with a fight.

In their goal to entertain such a clientele, Carl and the band played more than just straight forward country music. No doubt under the influence of more than one or two snifters (conducive to their surroundings, of course), they created a reper-toire that combined white hillbilly with black rhythm 'n' blues - in much the same way that Elvis Presley, Scotty Moore and Bill Black did when their seminal Sun recordings kick-started the whole rockabilly movement. Only Carl and his brothers were doing if before Elvis and his pals. Until now, we only had Carl's word for it, and he was much too humble a person to labour the point. His first Sun recordings, after all, dated from the fall of 1954 - after the groundbreaking Sun 209 - and his first release, the pairing of the country numbers 'Movie Magg' / 'Turnaround', didn't emerge until the beginning of 1955. But Bear Family's new release, 'Discovering Carl Perkins - Eastview, Tennessee, 1952 -'53' (BAF 14007), reveals that The Rockin' Guitar Man was indeed cutting loose on a shakin' spree a couple of years before he defined the very term 'rockabilly' with career-best waxings such as 'Honey Don't', 'Dixie Fried', 'Everybody's Tryin' To Be My Baby', 'Matchbox' and, of course, 'Blue Suede Shoes'. And it's all thanks to a gentlemen called Stanton Littlejohn, who didn't even rate a mention in Carl's 1996 autobiography, 'Go, Cat, Go! The Life And Times Of Carl Perkins'.

Had he forgotten all about the recordings he made at Littlejohn's house? It would appear he had. Littlejohn worked at a shoe factory as well as being a part time farmer in Eastview, Tenne-ssee. He also played the fiddle and liked to dabble with new technology, acquiring a sec-ondhand recording console around 1947 which enabled him to produce one-off acetate discs in the front room of his modest house just off Highway 45 South near the Mississippi state line. Pretty soon he had local musicians flocking to his home in order to test out his services, for which he never charged. One of them was Carl Perkins, who recorded material at Littlejohn's house sometime during 1952 (possibly '51) and 1953 - exact dates are unknown but this is all explained in the notes to this fascinating release. Only four selections have survived and make their debut here: just over eight and a half minutes' worth of music that offers a whole new perspective to the early career of the bopcat known as Carl Perkins.

Due to their very nature - literally home record-ings cut directly to acetate in one take - they don't have the aural impact of Carl's genre-defining Sun work, but they're mighty clear and serve to illustrate just how hep to the beat and ahead of the game the Tiptonville-born rocka-billy pioneer was. It's only right and proper that each one is dealt with individually as they appear on this collection. GOOD ROCKIN' TONIGHT A far cry from the version Carl would cut for his first Columbia LP in 1958, and far more laidback than Elvis' version on his second Sun single, this never-theless indicates how Carl was adapting the sound of black r&b at a time when few country musicians strayed from their hillbilly roots. It had been a hit for both writer Roy Brown (1947) and Wynonie Harris (1948) prior to picking up numerous versions in the years that followed, from the very top (Jerry Lee Lewis) to the very bottom (Pat Boone).

Carl used lyrics from the original versions that Presley eschewed, adding an effective call-and-response feature on the chorus and a guitar solo recognisable from his later Sun work (think 'Dixie Fried'). It retains a hillbilly edge to it, leading this listener to think it's how the song would've sounded had Hank Williams recorded it. THERE'S BEEN A CHANGE IN ME Carl was one helluva country singer, as we already know, and here he delivers a superb reading of a 1951 No.1 for Eddy Arnold. It's old-timey country, for sure, and he even manages to personalise one verse: "And then my mammy said, why son it's true, Carl, there's been a change in you." DRINKIN' WINE-SPO-DEE-O-DEE In the same laidback fashion as 'Good Rockin' Tonight', the 1947 Stick McGhee original that went on to become something of a rockabilly / rock n roll classic in the hands of The Johnny Burnette Trio, Jerry Lee Lewis and others, gets a solid outing in the early Perkins style.

He personalises it once more, opening the proceedings with "Down at the Nick Nack where every-thing's fine" - the Jackson juke joint replacing the Big Easy as the venue in question. He improvises again at the end of the first verse with "Drinkin' wine Spo-Dee-O-Dee, better pass that bottle to Perk". Lovely stuff. DEVIL'S DREAM This is an instrumental hoedown by fiddler Charlie Cox on which Carl is thought to play acoustic rhythm guitar. A traditional number of no real great significance, it's the least interesting of the quartet. Being able to hear these tracks 60+ years after the fact is nothing short of amazing. Their very existence wasn't known about until fairly recently but they're more than welcome additions to that cache of 'pre-fame' recordings we have by other Big Beat heroes such as Elvis Presley, Jerry Lee Lewis, Eddie Cochran and Buddy Holly. It's just a shame Carl himself is no longer around to give us his opinion on them. They're joined by five Sun outtakes from 1954 and '55 - "first time on vinyl" (!!!) - that continue the story and show us how Carl's brand of bop developed when he came into contact with Sam Phillips and his iconic 706 Union Avenue studio. 'Gone, Gone, Gone' (Take 1) 'You Can't Make Love To Somebody' (Take 3) and 'Perkins Wiggle' / 'Dixie Bop' (Take 1) take us to rockabilly heaven, while Carl's country side is represented by 'What You're Doin' When You're Cryin" (Take 1) and 'Sure To Fall' (Take 1), featuring the lead vocal of brother Jay. The packaging of the set is quite novel.

The nine tracks are on 10" white vinyl but also a "free bonus CD", and are joined by a 16-page booklet with detailed, authoritative notes by Hank Davis, Shawn Pitts and Scott Parker. There are period photos, too, plus shots of the four acetate labels. The front cover features an image of Carl with W.S. Holland taken in 1953. This is a superb release of historical performance that will please both hardcore Perkins and rockabilly fans alike. The initial 2000 print run had sold out within days of it being released; it's currently being repressed as I write. Carl Perkins' status as the ultimate rockabilly performer is elevated even further - if that's remotely possible - with this release. His claims of having been performing rockabilly in its purest form way before it reached a wider audience are on display for all to hear.