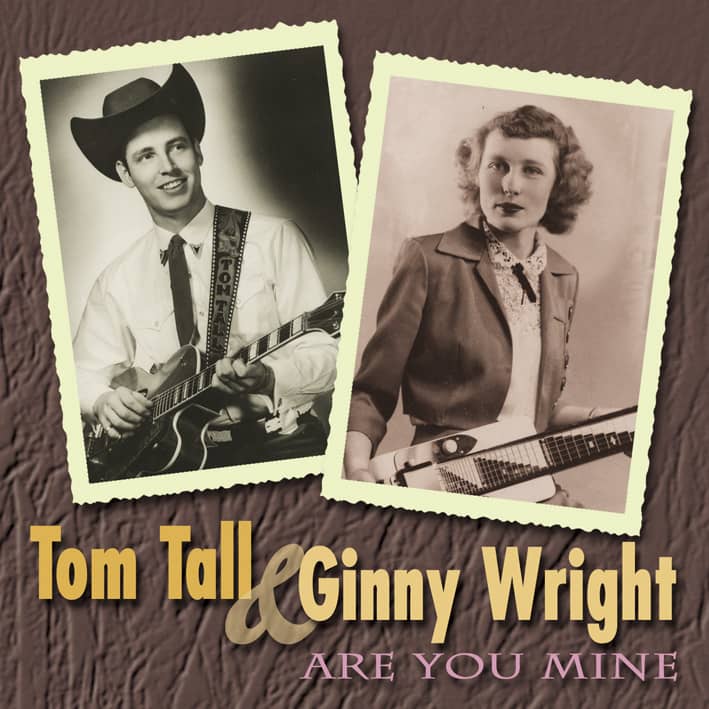 Born Virginia Henderson August 1, 1933 in Summit (now known as Twin City) Georgia, Ginny Wright was initially interested in many of that era's pop singers. After graduating from high school she moved to Cleveland, Ohio to live with her sister and studied opera, ballet and took steel guitar lessons. She later sang with a 20 piece choral group, performing mostly opera and popular songs. While working at General Electric, she met a woman whose brother-in-law Danny Ford led a local country band. "I used to work and sing," said Wright. "I'd love to sing on the job and this girl heard me and told me I had a good voice" Initially nervous with the new style, the young songstress discovered she liked the music of Hank Williams, and dropped opera from her repertoire. Ford's band invited her to play at square dances and other events where, billed as the Blue Star Girls, she sang with another girl Wright only remembers as 'Jo-Ann.' Proving unreliable, the bandleader let Jo-Ann go and young Ginny became a solo country singer.

Wright's climb to fame began in earnest after she heard about Triple-A Records in Cleveland. Triple-A's claim to fame came via the sale of Dan Howard's Oh Happy Day master to Essex, where it became a big hit. She arrived with the band's guitarist, her heart set on an audition. The label didn't seem interested at first, but suggested she speak to Jack Gale, who had a radio show on WSRS. "I went in the office and sang Hank Williams' 'Kaw-Liga' for him," Wright reminisced. "People had told me that if Hank Williams was a woman he would have sounded just like me." Subsequently, Gale advised the label to record her. "Ginny was 17 and a ball of fire. She came in and said that she was a female Hank Williams" Gale fondly recalled. "We took a chance with her even though we didn't record country, but she was very persistent." Her first Triple-A single featured a Ray Price song You're Under Arrest backed by Faron Young's Going' Steady.

TOM TALL
Tom Tall was born Tommy Lee Guthrie in Amarillo, Texas on December 27, 1937. Influenced by the music of Hank Williams and Hank Thompson, he was only 12 years old when he had his own radio program on KSNY in Snyder, Texas. The following year his family relocated to California where a very popular Hollywood disc jockey called the Squeakin' Deacon had a talent show every Sunday out at the River Rancho. "I would go out every week and enter that talent show," Tall remembered. In the fall of 1953, he not only won the contest but got the attention of Fabor Robison the head of Fabor Records. "Fabor just happened to be there that day and he gave me his card, invited me up to see him," said Tall. Robison asked Tall to record some demos at Western Recorders on Sunset Blvd. in Hollywood. Robison liked the results and offered Tom a contract. Six months later the youngster did his first recording session at the same studio where an important decision was made regarding billing. "They changed my name because Woody Guthrie was well known at the time," explained Tall. "Someone suggested Tall and I decided it worked."

In April of 1954, Tall recorded four songs which would comprise his first two releases, I Gave My Heart To Two People penned by Tall and Please Be Careful written by Dick Reynolds. I Want To Walk With You and the ballad You Loved Another One Better Than Me both were written by Tall. Backed by the Louisiana Hayride Band including Jimmy Day on steel guitar, Floyd Cramer on piano and D.J. Fontana on drums and Gene Davis a local L.A. musician was added on lead guitar.

The 'County Barn Dance,'with emcee Les 'Carrot Top' Anderson, provided Tall with a great early career opportunity. There he performed with Shirley Bates, Terry Fell, Skeets McDonald, Eddie Downs, Tex Atchison, Red Murrell, Johnny Mosby along with Glen (Glenn) and Gary (Lambert) as the Missouri Mountain Boys. "I always thought Tom was a good country singer," recalled rockabilly legend Glen Glenn. "He wanted to be a Jim Reeves, when he got the tour with Jim, I wished I was on Fabor."

Robison booked a tour with Jim Reeves headlining 'The String Music Show'that started at the 'Country Barn Dance.' The show, which featured Ginny Wright, Jim Ed and Maxine Brown, Alvadean and Sandy Coker, Shirley Bates and Tom Tall, went through California, Oregon and Washington State. The result was a grueling three week tour. Robison put the shows close together with hardly anytime off and pay was not always forth coming. "It was all new and I was excited to do something," Tall recounted. "Even though it was busy, it wasn't tough with such good musicians."

Filter
Close filters
No results were found for the filter!
Tom Tall & Ginny Wright: Are You Mine Art-Nr.: BCD16741

1 CD with 36-page booklet, 31 individual tracks, playing time 78:32 minutes. The story of Tom Tall and Ginny Wright is inextricably bound up with one of the music business’s larger-than-life characters: Fabor Robison. In addition to Tom...
$15.79 $18.05
more details
Song preview