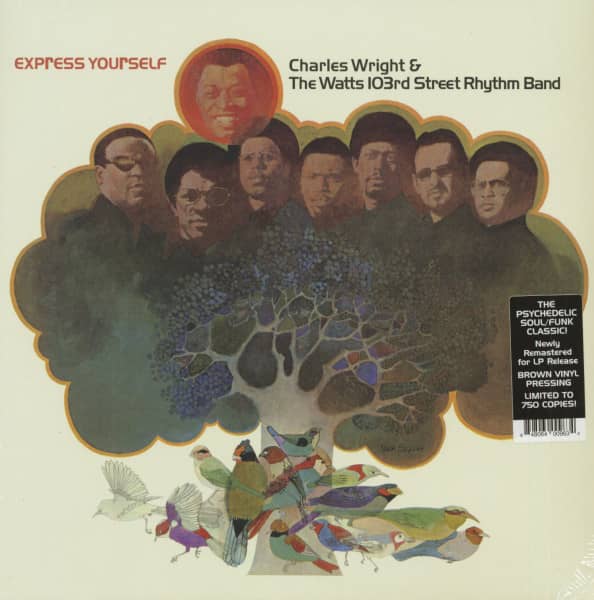 (Real Gone Music) 6 tracks
The 103rd Street Rhythm Band of Charles Wright & the Watts was one of the greatest Soul / Funk bands of the late 60s and early 70s.
Their 1970 album Express Yourself is their ultimate artistic statement and contains their biggest hit "Love Land". The LP is pressed on brown vinyl and limited to 750 copies.

No Los Angeles group dealt funk like Charles Wright & The Watts 103rd Street Rhythm Band. Their grooves were hot and cool at the same time; they could stretch out and jam like jazzmen, so honed were their instrumental chops, and their name announced to the world that they hailed from the soulful side of the  City of Angels.

Guitarist Wright was born in Clarksdale, Mississippi in 1940 but moved to L.A. at 12. Deeply influenced by local R&B crooner Jesse Belvin, the high schooler waxed his first single, Eternally, in 1956 as Little Cholly Wright on Cholly Williams' self-named Cholly imprint, though deejay Dick 'Huggy Boy' Hugg reissued it on his Caddy logo as by The Twilighters. Under that name, the group made 45s for Ebb and Cholly, and Pan World issued a 1960 Charles Wright single, (It's Gotta Be) The Right Time.

The first incarnation of the Rhythm Band came together in 1966 to cut a theme song for L.A. deejay Magnificent Montague, which got so popular that it came out on producer Fred Smith's Keymen label as Spreadin' Honey. Comedian Bill Cosby hired another outfit that included Wright to cut some sides for Warner Bros., notably Cosby's droll '67 hit Little Ole Man. Smith and Cosby helped get Wright's outfit a contract with Warner Bros. (an imprint not generally associated with R&B until then), where they cut their album debut, 'Hot Heat And Sweet Groove.' The ultimate Watts 103rd Street Rhythm Band lineup consisted of Wright, guitarist Al McKay, bassist Melvin Dunlap, drummer James Gadson, saxists Big John Rayford and Bill Cannon, trombonist Ray Jackson, and trumpeter Gabriel Flemings.

Their first album as a unit was titled 'Together,' and they were, honing their grooves as the house band at a happening Hollywood Boulevard nitery called the Haunted House. Do Your Thing, their first Warners smash in '69, originated in a jam on its stage. Before year's end, they hit twice more with Till You Get Enough and Must Be Your Thing. Their first 1970 hit, the liberating Love Land, was actually a more potent pop seller than R&B (by now, Wright was front-billed with the group on the label).

Cut at Gold Star Studios in L.A., the Wright-penned-and-produced Express Yourself was the pinnacle of the band's funk exploits, his playfully languid vocal counterpointed by the extremely infectious goings-on unwinding underneath—punchy horns, chicken-scratch guitar, and a deadly groove locked down by Dunlap and Gadson. It leaped to #3 R&B and #12 pop and served as title track to one of their most popular albums.

There would be another hit at Warners, Your Love (Means Everything To Me), but the band's classic configuration would soon splinter as Wright moved to ABC-Dunhill for his last R&B chart entry, Doin' What Comes Naturally. Their reign wasn't as long as James Brown's, but The Watts 103rd Street Rhythm Band was a true funk machine.