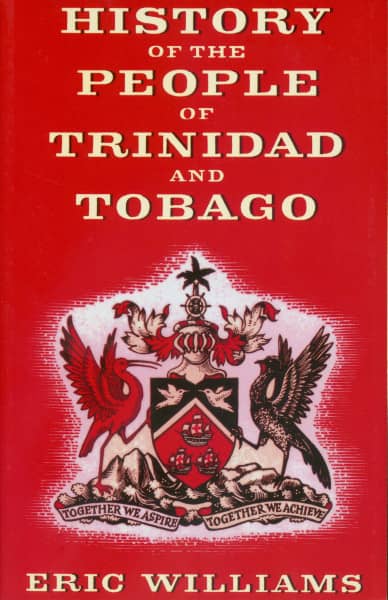 Eric Eustace Williams: History of the People of Trinidad & Tobago

Introduction to the London Edition
This book tells the story of the travails and tribulations of a British Colony which, after a hundred and sixty-five years of crown colony rule, achieved its independence on August 31, 1962. It is the story of the misrule of metropolitan bureaucracy and the indifference of metropolitan scholarship. Trinidad and Tobago attracted metropolitan attention only in periods of riot and disorder (1903 and 1937), only when the discovery of oil made it an object of interest to the British Navy and British capitalism, only when its in-valuable natural harbour, Chaguaramas, made it a useful pawn to be traded by Britain against American aid in the Second World War. These developments apart, Trinidad and Tobago was merely a crown colony, forgotten and forlorn.

No British statesman of sub-stance was ever distracted by it from larger and more important issues, unless it was Joseph Chamberlain, and his connection with Trinidad and Tobago is probably the least reputable phase in his career. No British scholar found it worth his while to pay any atten-tion to the history and potential of Trinidad and Tobago, unless it was Froude who came and went on a tourist visit leaving only froudacity behind. To metropolitan officialdom and the metropolitan press, Trinidad and Tobago emerged, after the revelations of the bankruptcy of colonialism by the Royal Commission of 1938, merely as a colony with a higher national income than its neighbours which, by imperialist criteria, did not need the economic aid provided under Development and Welfare by the United Kingdom.

Colonial nationalism, in India, Africa and elsewhere, has given high priority to the rewriting of the history purveyed by metropolitan scholars and to writing that history where the metropolitan country has ignored or bypassed it. The very fact of National Independence, therefore, made this history of Trinidad and Tobago mandatory. Its publication, moreover, throws light on one of the dark crannies of the long West Indian association with Britain which British scholarship has seen fit to leave unexplored. This history of the People of Trinidad and Tobago will, it is hoped, explain to people, within and outside the Commonwealth the policy of the new Independent Commonwealth country...

Doctor Eric Williams was Prime Minister of Trinidad and Tobago from 1961 until his death in 1981. He built his reputation as a historian as Professor of Political and Social Science at Howard University, before turning to active politics, founding the People's National Movement (PNM.) and leading Trinidad and Tobago to independence in 1962.