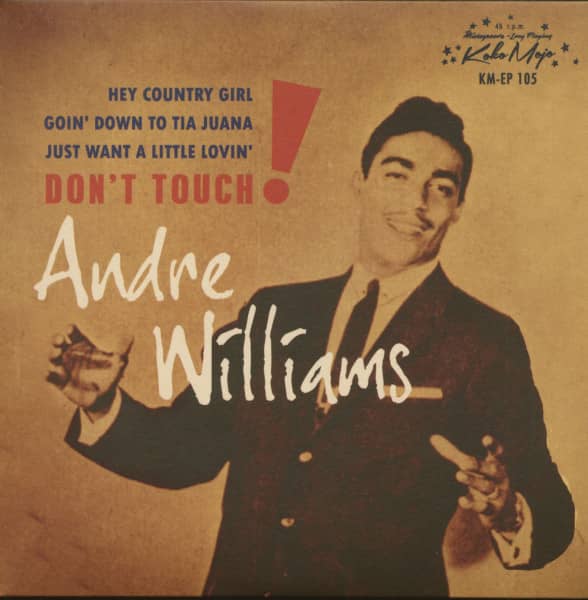 Zephire "Andre" Williams was born in Bessmer, Alabama on November 1, 1936. He lost his mother when he was 6 and learned how to take care of himself at a very early age. At 14 he enrolled in the US Navy using his older brother's birth certificate. A year later he was busted and sent home with a dishonorable discharge. As Garth Cartwright wrote "Andre Williams is neither a great singer nor a great musician in the traditional sense, but he is undeniably a great character, an innovator with a smile on his face and a hard-on in his pants.

In a career spanning nearly six decades, Williams has worn all kinds of musical hats — songwriter, singer, producer; arranger, talent scout." After his brief stint in the Navy, he moved to Detroit where he won a talent contest at the Warfield Theater. Williams said "There was a talent show going on there. I scent there and I think I won four shows straight. If you won one week, you could come back next week If you won first prize, it was $25 a week. I didn't consider myself a singer. It was the $25! I didn't know what I was really going to do. I'd just gotten out of the Navy and hadn't made up my mind what I was going to do." He caught the eye of Fortune Records, who signed him in 1955.

Fortune Records was a small family operated, independent label owned by Jack and Devora Brown. Fortune specialized in R&B, blues, soul and doo-wop music, but they also released pop, big band, hillbilly, gospel, rock and roll, and polka. Other artists on Fortune were John Lee Hooker, Doctor Ross, Nolan Strong & The Diablos and Nathaniel Mayer &. Fortune's studio was very primitive and even by the standards of the mid-1950s, but this only encouraged Williams to think in a more creative way. Williams recalls "We 'd go out back of Fortune. smoke some reefer, drink a bottle of wine, and come up with a song. It took a genius to mix what we cut andMrs. Brown, she did it!"

Andre recorded for the label a string of singles both solo and with a vocal group called the 5 Dollars- also billed as 'The Don Juans' on some of his singles. His hit Bacon Fat was a solo effort. The song reached # 9 on the R&B chart in 1957. Other personal fave songs are Jail Bait and Pass The Biscuits, Please but to be honest everything Andre recorded for Fortune. This material is largely available, so we decided to focus on four lesser-known songs here. The Latin-flavored Coin Down To Tia Juana (Fortune 824) was released in 1955. The following year he recorded Just Want A Little Lovin'(Fortune 827) and Don't Touch (Fortune 839) in 1957. The rockin' Hey Country Girl ( Fortune 842) was released in 1958.

Andre said "I knew I wasn't a singer but I knew I could put words together It was just coming up with the stories and putting the stories to some music...You're either a singer or a performer. I'm a performer." Williams recorded for Fortune until 1961, before becoming more and more involved with production and started to work with Motown. He worked with a young Stevie Wonder, Ike & Tina Turner and dozens of legendary artists. He kept on recording very cool records himself in the 60's and the 70's that are regarded as early rap.

Sadly by the end of the 1970s, his alcohol and drug addiction turned him into a homeless beggar. In the 1980s, he kicked his addictions began to tour and on the alternative rock circuit. Idolized by bands as The Cramps, Andre Williams was taken on tour by The Jon Spencer Blues Explosion and started recording with Spencer, The Dirtbombs, and other alt-rock bands, enjoying a new career. -Little Victor (a.k.a. DJ "Mojo Man)

A maverick to the core, Andre Williams has done it all over close to six decades in the recording industry: singing, dancing, songwriting, producing, and doo-wopping.

Born in Bessemer, Alabama on November 1, 1936, Andre moved to Chicago's South Side with his folks in 1941. At age 16, he was a member of The Cavaliers, then graduated to The Five Thrills, who cut in 1953-54 for deejay Al Benson's Parrot label. Williams' Navy adventures took him to San Diego, where comic Redd Foxx gave him his nickname of 'Mr. Rhythm.' "I wasn't a hell of a singer, so I could make up for it by dancing and doing the splits," says Andre. Williams ended up in Detroit with The Five Dollars, who cut for Jack and Devora Brown's Fortune Records.

Fortune was a shoestring operation. "It was so small that the storeroom was a studio," says Williams. "They were using the record boxes that the records came in, they were using that as sound acoustics." The Five Dollars debuted on Fortune in 1955 with the weird Harmony Of Love, which had no lyrics, just harmonizing. Andre led their followup Going Down To Tia Juana, which had words; it came out late that year with Pulling Time on the flip, credited to Andre Williams with The Don Juans. The billing held for a Williams-fronted It's All Over b/w Bobby Jean in 1956.

Andre recruited a different outfit, imaginatively called 'His New Group,' for his first national hit as a vocalist: tenors Geno Purifoy (aka Parks) and Stave Gaston, baritone Bobby Calhoun, and bass Jay Johnson. Williams dreamed up one of the most laidback rock and roll dance songs ever, Bacon Fat. "We had been going back and forth to this particular club, the Flamingo, in Memphis," he says. "There was two-lane highways then. And you could see these cotton pickers all on the side of the road. We would stop and kid around with them, then go up to their house and drink lemonade and eat. And I just came up with the song about cotton pickers. And I was eatin' a bacon sandwich. I just tapped it out, and I was coming up with the words, and I had the bacon in my hand, and folks with sacks on their backs."

Paired with an eerie Just Because Of A Kiss, Fortune issued Bacon Fat in November of '56 and it started to take off locally. Epic Records, a subsidiary of Columbia, released it nationally the following month on the recommendation of Detroit deejay Bristol Bryant, resulting in a #9 entry on 'Billboard's' R&B 'Best Seller' lists in early '57. Andre stayed at Fortune with the fabulously bizarre Jail Bait and The Greasy Chicken.

He got in the ground floor at Motown only to fall out with Berry Gordy (several times), returned to Chicago and produced hits for The Five Du-Tones and Alvin Cash, worked A&R for Mercury's Blue Rock logo (where he produced Sir Mack Rice's original Mustang Sally), and cut another hit of his own for Chess in '68, the streetwise Cadillac Jack. Andre subsequently battled drug abuse and homelessness, triumphantly reemerging as sartorially splendiferous and lascivious as ever. 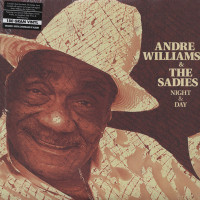 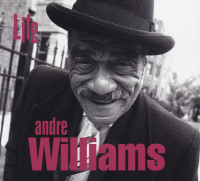