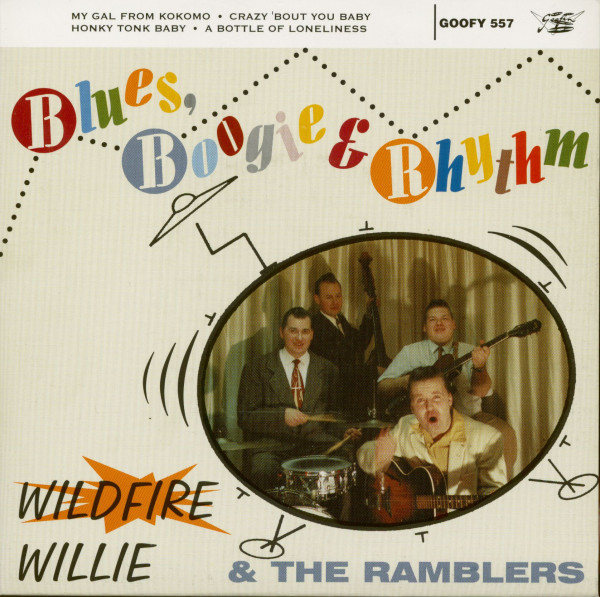 Wildfire Willie is a 4-piece band from Scandinavia (Finland, Sweden) that are playing Rockabilly with a traditional sound and style
Started in 1985 by brothers Jyrki JJ (Guitar) and Markku (Drums) Juvonen. In late 1986 Jan (Vocals) joined the band as a singer and since 2003 the bassplayer is Carl Viktor.
The band has been doing gigs and touring in many different European countrys and even in the former Soviet Union, Japan, Australia and several times in USA
and also has been as a backing band for many original 50's artists

Petri left the band In the summer 1986 and only concentrated on his work as an electrician, so for a while Mika did all the singing before it was decided to search for new singer to replace Petri so Jan Swampson (from Jan Swampson and his Thermosar) joined The Ramblers in late 1986, after Mika quit the band in the early 90's, The Ramblers went through a succession of bass players but since 2003 Carl Viktor has been playing the bass.
Wildfire Willie has now at present only its two remaining original members, Jyrki (Lead Guitar) and Markku (Drums).

Wildfire Willie and The Ramblers has performed on differnt events such as in pubs, night clubs and festivals like the Hemsby RocknRoll Weekender and Rockabilly Rave in UK, Viva Las Vegas, Rockin 50s Fest (Green Bay), Denver RocknRhythm Festival in USA, Wintersun Festival in Australia, RocknRoll Jamboree in Finland, in Sweden the Live & Jive festival and The Hultsfred festival (biggest music event in Sweden) etc. It also has many different appearences on radio and TV shows.

The band has been doin gigs and touring in many different European countrys and even in the former Soviet Union, Japan, Australia and of course many times in the USA.
Recordings have been made for several different labels in Europe (Wildcat, Sunjay, Tessy Records, Lenox, Be Be's Records, Goofin' and Tail).