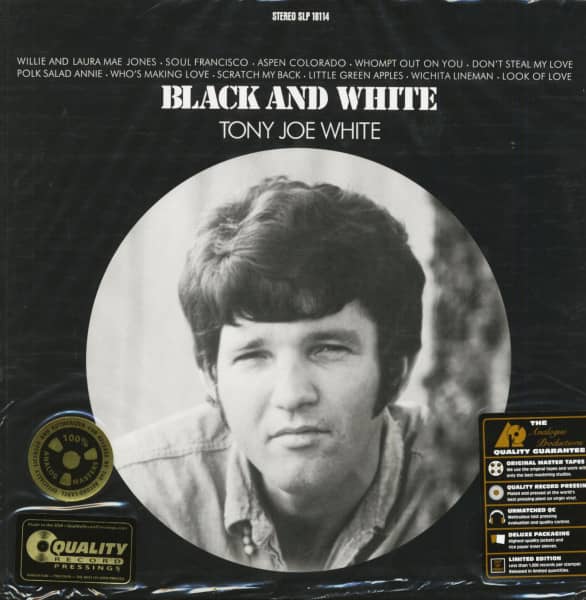 Singer-songwriter Tony Joe White's most famous hit began like this, "Some of ya'll still never been down South...down there we've got a plant, looks somethin' like a turnip green. 'Cept it ain't."

"Polk Salad Annie" was the song and cadence for White's distinctive swamp-rock sound, reminiscent of the sound John Fogerty whipped up on Creedence Clearwater Revival's Bayou Country and Green River.

His 1969 album debut, Black and White, contains some of the best swamp-folk-soul-funk songs of the era. White grew up in the swampy swamps of Louisiana, his deep voice sounding as if it had been dredged from the depths of the Delta. Rural life in the dirty South provided the inspiration for witty, sometimes funny and sometimes poignant lyrics (later Tony Joe would write the hit "Rainy Night In Georgia").

This Analogue Productions edition is the highest quality reissue of Black and White to date. It was mastered by Kevin Gray at Cohearent Audio from the original analog tapes and features an unsurpassed coating and pressing on 180-gram heavyweight vinyl from Quality Record Pressings, makers of the best-sounding LPs in the world. The dead-silent LP playback surface captures White's voice and his strong and funky backing band in true analog majesty. Also included is a new, exclusive interview with the album's producer, Billy Swan, in the original liner notes!

In addition to "Annie," the first side of Black and White includes several other White originals. AllMusic judges that the best of these are "Willie and Laura Mae Jones," a song about race relations with an arrangement similar to that of "Ballad of Billie Joe," and "Soul Francisco," a short, funky tune that was a big hit in Europe in 1968. "Aspen, Colorado" anticipates the later "Rainy Night in Georgia," a White composition popularized by Brook Benton.

The second side of Black and White consists of cover versions of hits of the era, with the funky "Who's Making Love" and "Scratch My Back" doing better than the slower tracks. Dusty Springfield had a minor hit with "Willie and Laura Mae Jones," and White's songs have been picked up by other performers over the years, but "Polk Salad Annie" and The Alligators Got Her Grandma made for his only entry on the American charts.