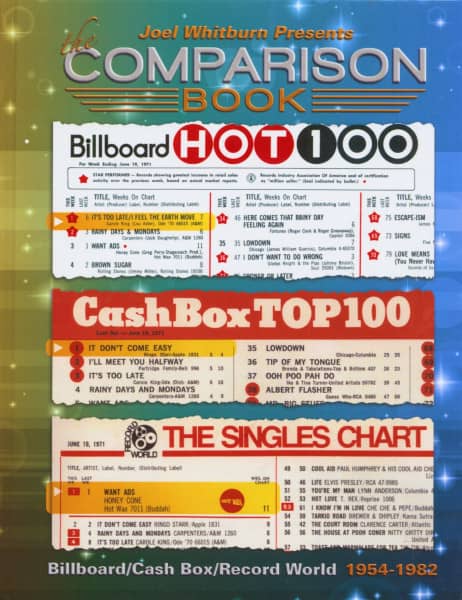 The Comparison Book contains EVERY song that appeared on any of the main pop singles charts of the three top music magazines, Billboard, Cash Box or Record World/Music Vendor, when these three periodicals existed together, from 1954-1982.

This alphabetical by artist listing displays for each charted single its date charted, peak position and total weeks charted -- for each pop chart on which it appeared!

Chart data for all songs with multiple chart entries is listed in order of peak chart performance.

The research for this book kicks off with the debut of Music Vendor on October 4, 1954, and continues for all three magazines through the final issue of Record World on April 10, 1982.

Convenient! At a glance see data from multiple charts for one song! Not shown are record labels, biographies, symbols, title trivia, certifications, etc.

We now show everything that appeared below the Top 100 of Music Vendor and Record World's pop singles charts, not just the exclusive titles that appeared in our sold-out #101-150 Hit Records book.
Also appearing are the "coat-tail" hits! From 1954-69, songs recorded by multiple artists were listed together at one chart position. On the actual charts, Music Vendor/Record World listed the artists for every version in current release under each title according to popularity. However, some songs that were big hits by more than one artist (ex: "Raunchy" by Bill Justis and by Ernie Freeman) were always shown with just one artist listed first under the title. Since many of these "coat-tail" songs were considered hits in their own right, we've added them to the Music Vendor/Record World listings with an asterisk (*) next to the peak position.

Q: When did The Beatles and Bob Dylan first hit the American pop singles charts?

Q: Is Elvis still The King with the most charted pop hits?

A: Elvis is still the "King of the Charts" with 170 entries in this book and increased his #1-hit total by four to 22; however, The Beatles still carry the record for most #1 hits, also increasing their lead by four, from 20 to 24 chart-toppers.