(RCA International) 12 tracks - Re-issue of the original 1956 'RCA' LP compilation,
Every man is at least somewhat more complicated than he appears to be—even to himself. Fats Waller was more complicated than most. To his large and enthusiastic public, he was a one-dimensional man, a hilarious entertainer who also happened to play piano. To jazz musicians and to his intimates, he was a richly creative pianist, who happened to be an extraordinary entertainer. To his family and to those who knew him exceptionally well, he was a musician of wider ambitions and needs. He had a large library of classical music; and, his long-time colleague, Gene Sedric, observes, 'He especially loved Bach.

' He also loved the organ, and would have liked to have played it more; but his public wouldn't sit still, or so he felt, for Fats Waller playing a Bach chorale or a spiritual seriously on the organ. And he also loved playing jazz. 'The real triumphs that Fats cherished,' Rudi Blesh and Harriet Janis comment in They All Played Ragtime, 'were not the public ones. Quiet backroom sessions with James P. and Willie the Lion and The Beetle, when the gin and the creative inspiration flowed. . .' Yet I feel he loved some of the public memories too. His was so lively a wit that I expect he enjoyed seeing a large audience fall out after one of his shafts—particularly perhaps when it was satirizing. Off the stand or stage, Fats was renowned for his herculean round of pleasures. To those who shared his gin, he must have appeared the very model of a hedonist. Yet, says Gene Sedric, 'he was also very religious, very religious. He was a Bible student. I believe that had he lived his ambition was to have a 'big traveling religious show.' His father, Edward Martin Waller, had been deacon and later pastor of the Abyssinian Baptist Church in New York. His mother Adaline was also devout. And the music as well as the religious heritage was also in the family. Adaline Waller was a pianist, organist and vocalist. Fats' grandfather, Adolph, had been a violinist; and, according to the research of Blesh and Janis, he had toured the South after the Civil War. The combination of secular pleasures and sustained religious interest that marked Waller's personal life was paralleled in part in his musical development. After classical studies and playing in church and at prayer meetings when he was a boy. Fats became increasingly fascinated by the whirling world of ragtime, jazz and theater music.

His father at first regarded this latter kind of musical diversion as 'from the Devil's workshop,' but Fats felt it was possible to enjoy and to play both Carolina Shout and a Bach chorale—depending on the mood you were in at the time. As Fats gained more success in the Devil's workshop, he had to gratify his love for the other music mostly in private. And he always wanted to play and write more in that language. As he neared his fortieth year he hoped, in fact, to be able soon to travel less and to compose more. But he died at thirty-nine. Although he is not likely to have had a premonition of so early a death, Fats lived as if his time were short. Blesh and Janis estimate that from the time he made his first solos for Okeh in October, 1922, Fats played on nearly 500 records and a large number of player-piano rolls. And, although he often had to be cajoled into sitting down long enough to compose, he copyrighted over 400 musical compositions in his short life, many of them such perennials as Honeysuckle Rose, Ain't Misbehavin, Squeeze Me and Keepin' Out of Mischief Now.
Nor was Fats a man given to extended rehearsals for his record dates or his concerts. The intensity and speed with which he lived and balled and seldom rested left no time for having time. But he rarely appeared bothered by having to record cold or write cold.

'Fats,' says Gene Sedric, 'was the most relaxed man I ever saw in a studio. And so he made everybody else feel relaxed. After a balance had been taken, we'd just need one take to make a side usually, unless it was a kind of difficult number.' And, as French critic Frank Tenot has noted, although his associates on records were not always of the first order, Fats was able to galvanize, to animate them into giving the best of themselves. And whatever he played or sang—on record or anywhere — had the enormous rhythmic vitality, the swing that his name alone brought to ear. Although he was so frequently in a hurry, even his haste always pulsated. Fats' rush to live also did not interfere with the structure of what he played. A brilliant analysis of a chracteristic Fats' solo, Keeping' Out of Mischief Now, can be found in Andre Hodeir's Jazz: Its Evolution and Essence (Grove Press, pp. 169-176). It demonstrates, as does so much of Fats' work, 'clear, well-directed thought serving a marvelously felicitous melodic simplicity' and a consistency of 'freshness' in improvising that has not been equaled by many jazzmen. James P. Johnson, the man who had the most musical influence on Fats, once sketched Fats in a single sentence: 'Some little people has music in them, but Fats, he wwas all music, and you know how big he was.' 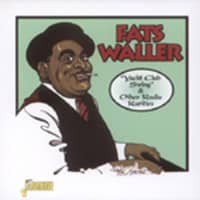 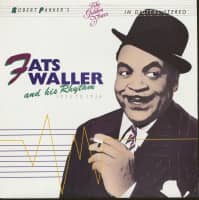 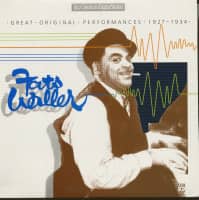 Tracklist
Waller, Fats - Ain't Misbehavin' (LP) LP 1
01 Honeysuckle Rose
02 Ain't Misbehavin'
03 I Can't Give You Anything But Love, Baby
04 Two Sleepy People
05 I'm Gonna Sit Right Down And Write Myself A Letter
06 It's A Sin To tell A Lie
07 The Minor Drag
08 The Joint Is Jumpin'
09 Hold Tight
10 Your Feets Too Big
11 Until The Real Thing Comes Along
12 Tea For Two
Funktionale