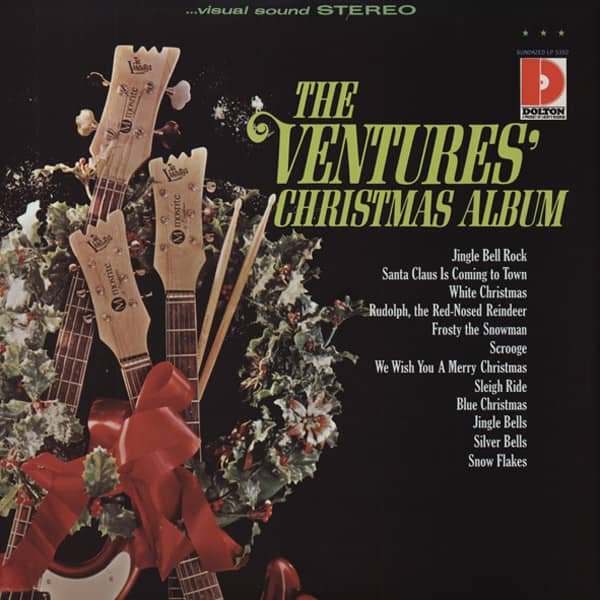 As rock's biggest-selling and most influential instrumental combo, the Ventures are one of America's most iconic bands. Long before anyone had heard of the Beatles, the Ventures influenced kids around the world to invest in electric guitars. The quartet delivered a sleek, instantly recognizable sound whose influence spread as far as Japan, where they remain bigger-than-life superstars. Having recently celebrated the group's 50th anniversary as well as their induction into the Rock and Roll Hall of Fame, the Ventures continue to exercise a massive influence on nearly every instrumental guitar band that followed them.
The Ventures were also one of the first rock acts to conquer the album market, selling large quantities of their LPs at a time when rock 'n' roll was still largely a singles medium. One of the band's best-loved longplayers is The Ventures' Christmas Album. Originally released in 1965, it finds the foursome--featuring the legendary guitar-slinging frontline of Bob Bogle, Nokie Edwards and Don Wilson--applying their trademark style to a dozen familiar yuletide tunes, including 'Sleigh Ride,' 'Santa Claus Is Comin' to Town,' 'Jingle Bells' and 'White Christmas.' The Ventures soup up these seasonal standards by adding snazzy guitar phrases that quote then-current rock 'n' roll hits by the likes of the Beatles, the Searchers and Johnny Rivers, as well as a few older Ventures classics.
In the years since its release, The Ventures' Christmas Album has remained a holiday favorite, as well as one of the most popular items in the band's catalog. Tracks from the album continue to grace the radio airwaves during the holiday season, and are regularly included on Christmas-themed compilation albums. But the best way to experience these instrumental gems is on the complete original vinyl LP. Sundazed Music has mastered this vintage gem from the original analog tapes and pressed it on vinyl, with complete original cover art.