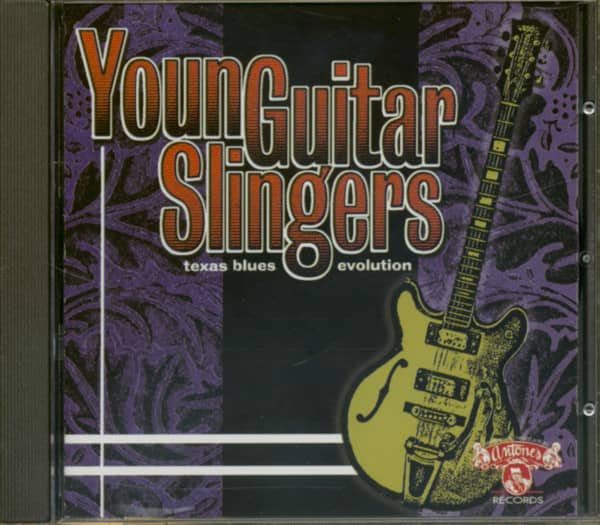 (Antone's Records) 11 tracks (47:32)
Austin, texas is the western outpost of the blues belt. a swath of the American heartland that is centered in the Mississippi delta, runs across the south, and stretches north to Chicago and even, some may rightly argue, all the way up Minneapolis. But however one maps out the amorphous land of the blues, there's no denying that Austin is one of the capitols of contemporary blues music.
The undeniable major factor in Austin preeminence in blues music was the opening Antone's Nightclub on Austin's Six Street in 1975. It was there that the first crop of Austin young guitar slingers found not only a wecoming home, but also a place where they would meet and play with their idols like Muddy Waters, Albert King, B.B. King . Otis Rush and many more `Today, those once-budding talents like Stevie Ray Vaughan, Jimmie Vaughan and The Fabulous Thunderbirds, Denny Freeman and Derek O'Brien have left their mark on the Austin music scene and the world at large,

The club's major domo, Clifford Antone, went on to and this record label and over the last quarter century establish his club in a number of locations as one of the greatest venues for blues and much more on the entire planet. And within his mission to preserve and propagate the blues encouraging arming young talent has always been at the forefront  Perhaps it's something in the Austin water for weather or food or one cheap rent o because successive crops of yo g guitar guns have continued to stride onto the city's stages and launch themselves to renown.

The generation or so preceding the artists featured here certainly reads like an honor roll of badass six-stringers. From the mid-1980s into the 19-90s, Austin bred nurtured Ian Moore, Charlie Sexton, Sue Foley, Doyle BramhamII, Chris Duarte, Chris Thomas King, Will Sexton, Jake Andrews and a number of others. Some of them have moved into other real ,s beyond the biues, and some of them have taiien the blues into other realms Their stature attests to how the Austin music scene supports and nurtures precocity precocity into preternatural musical maturity.