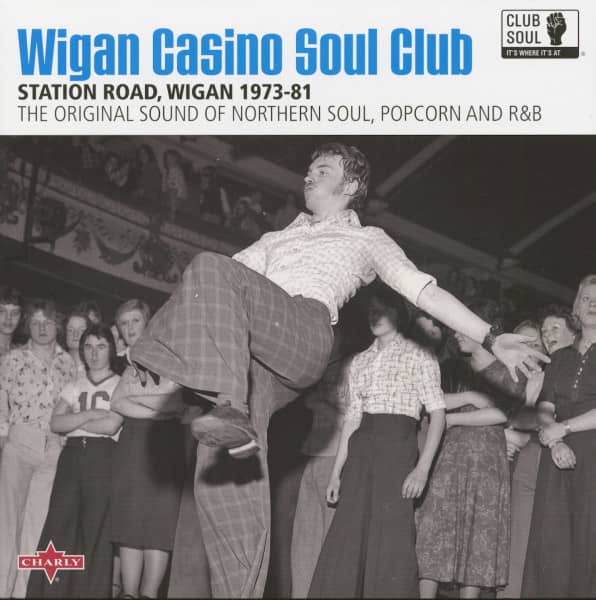 (Charly) 16 tracks
In the early hours of Sunday morning, 23rd September 1973, Jim McClusky, lead singer with local band 'Forum', was packing up his gear after another night at the 'Emp' (Empress Hall aka the Casino Club). As he approached the exit he was net by dozens of kids pushing to get in. He asked Mike Walker, the Casino manager, what was going on and Mike replied: 'It's something new we're trying, it might not catch on.' The 'something new' was of course the first of the famed Wigan Casino All-nighters and, irony of ironies, within two years McClusky would appear on the BBC's Top Of The Pops performing a cover version of the Northern Soul classic 'Skiing In The Snow' as the frontman of 'Wigan's Ovation'!

No-one could have predicted the enormity of Wigan Casino and the impact it would have on Northern Soul. Perhaps it was a combination of circumstances: the untimely demise of the Golden Torch in Stock-On-Trent, the escape from the workplace
that the 'scene' offered, a sense of belonging, and something your parents couldn't begin to understand! The story of Wigan Casino has been recounted many times, and as we celebrate the 45th Anniversary of the first All-nighter (at the time of writing) it is remembered with a heightened sense of nostalgia. The vision for the All-nighters was that of Russ Winstanley, a passionate soul fan who had been Wing around Wigan for a couple of years. He was familiar with the Empress Hall (Casino Club) on Station Road which boasted a 1,500 capacity and a huge wooden, sprung dance floor. Russ approached the Casino manager, Mike Walker, himself a Northern Soul fan and a former patron of Manchester's Twisted Wheel. Walker saw the potential and the pair presented the notion to the owner Gerry Marshall. He was not convinced, 'if you think Inc stopping up all night you must be joking.'

Marshall had managed the Wigan landmark since the Sixties. It offered Cabaret in its adjoining club, the Palais de Dante (aka Mr M's), and Beat groups in the main ballroom. However, by 1973 the venue was in its decline with headline acts such as Toni Jones, Dusty Springfield, Herman and the Hermits, David Bowie and The Rolling Stones a distant memory. With little confidence Marshall relented.

652 new members made it to the opening night, surprising everyone, especially the sceptical Mr M. It turned out to be quite a low attendance as week-by-week membership grew, soon attracting over 1,000 devotees from across the country. Marshall, true to his word, didn't stop up all night, but was quite happy to collect the cash on Sunday mornings, which he concealed in two record boxes!
By the time the 4th Anniversary loomed, the Casino membership had reached a heady 50,000 and, following the Granada documentary This England (12th December 1977), it spiralled to over 100,000...
Northern Soul had arrived!