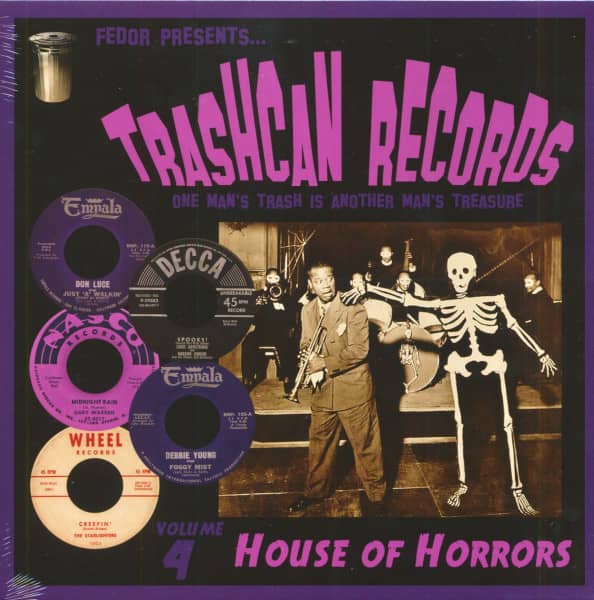 Welcome to the fourth volume of Trashcan Records, a new compilation series on Stag-O-Lee, devoted to obscure and forgotten vinyl treasures from the 1950's and early 1960's. This time I have selected twelve spine-chilling and bloodcurdling surprises from my record boxes.
Side A is an all out Halloween extravaganza with spooky jivers by Louis Armstrong and Jackie Brooks, two creepy crawling and hard-to-find Popcorn instros, and the ridiculous romp that is Merv Griffin's 'House of Horrors'!
A special mention goes to the eerie ‘Last Ride’ by The Dukes. This track, which was recorded but remained unreleased in 1956, is a real gem!
On side B we move into Jazz Noir territory with six gloomy and doom-laden rarities. You'll find two obscure Empala records by Debbie Young and Don Luca. Empala, a small Hollywood label, had a curious soft spot for the forlorn and also released some excellent moody tunes by Les Lovell, Jack Hammer and the Bartlett Brothers.
The gorgeous 'Gray Skies’ by Sheri Lee Douglas and the Gondoliers is an old Lux Interior favorite. You can find it on the flip side of the Wavy Gravy classic, 'Chime Bells'. And last but not least, I like to mention the suspenseful 'Tormented' by band leader Eddy Rogers, which is quite an obscure find. Billboard Magazine in 1959 fittingly wrote that it: "creates a mood of tension and uneasiness, and maintains an interest".