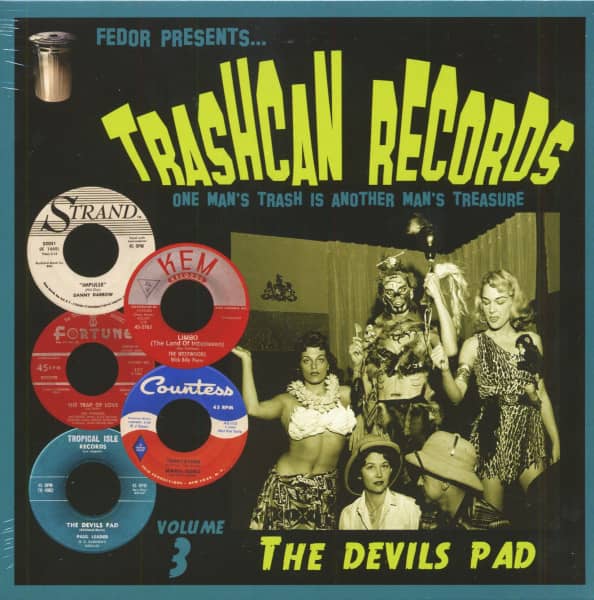 Welcome to the next volume of Trashcan Records, a new compilation series on Stag-O-Lee, devoted to obscure and forgotten vinyl treasures from the 1950’s and early 1960’s.
Compiled by Fedor, an Amsterdam-based record hound, whose huge collection mostly comes from flipping through thousands of used record boxes at Amsterdam flea markets for the last 25 years.
This time we will take a closer look at two different sources of inspiration that permeated late 1950's pop music: the exotic melodies of far away times or places, both real and imagined, and the hip sounds of the urban nightlife scene.
On side A we find bongo-beating pop ditties by crooner Paul Leader and rockabilly cat Jimmie Hombs, vocal acrobatics by French singer Didièr Laypére in a rousing version of Tequila, and a highly collectible Popcorn rarity: Ron De Salvo’s rollicking ode to Queen Cleopatra, 'No No Cleo'.
On the B-side we leave the exotic lands behind for the big city sounds of late 1950's America. Expect some smokey club grooves and a cool beatnik vibe in songs by Detroit vocal group The Premiers and Chicago singer Danny Darrow, plus a sassy rendition with a driving mambo beat of the evergreen 'Bei Mir Bist Du Schön', sung by movie actress, Dorothy Loudon.
Jerry Madison’s frenetic 'Theme From Von Hutch' is something else altogether. Originally the flip side of a silly but enjoyable novelty tune, it now stands out as a mesmerizing mix of complex rhythms, sax and strip music. These were the exciting sounds perfectly suited to a bachelor lifestyle, and nobody illustrates this better than Edd ‘Kookie’ Byrnes, with the help of Don Ralke, on the bonkers 'Kookies Mad Pad’.
Maybe these records lack authenticity and were nothing more than a pop pastiche of what was really considered fashionable at the time. Nevertheless, they captivated the audience’s imagination until the next craze came around... the immensely popular Twist!