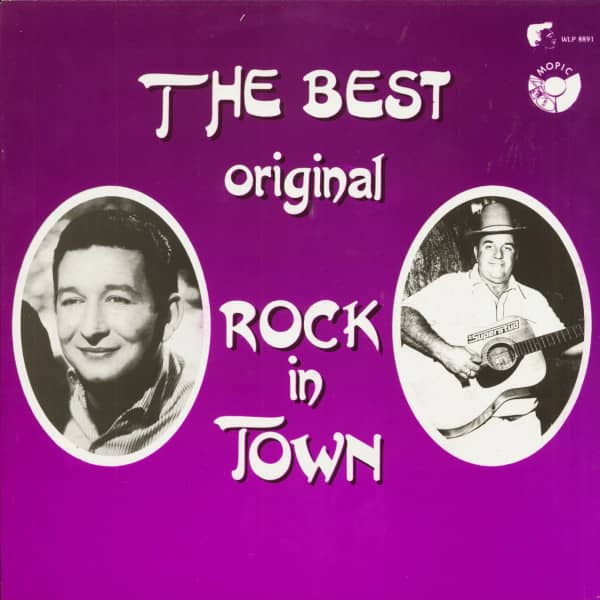 Another nice collection of boppers of mainly hard to find items. Those of you who buy our LP's regulary know that there do not have to be "known" names to make a-good rocking 50's product as this release proves again. Mike More opens side one with "The Chick". A good rocker but unfortu-nately a little short. This was originally done for Cyclone Records.

Don Coates, former All American and OLympic prospect from San Antonia, Texas, started out as a vocalist at the age of nine. His first recording was "Bermuda", done in 1956. He then went to Holly-wood to play in many clubs and to play lead guitar in the film "Rock Baby, Rock It". His natural talent made him sing easy and dance and entertain the people to the outmost. The recordings on this LP were done in California for the Round record label from Long Beach.

Jerry Dee also recorded his "Skate Board Granny" for the Round Label. The last known issue on a label that had many different kinds of music. Al Edwards &The Jaguars recorded their`It's Cool" for the Massachusetts Radax label. From Arkansas comes Buddy Phillips with two great recordings fol-lowed by another great Southern rocker Don Ruby who is Rocking his piano away. Some very nice piano rockers on side two of this album, starting out with Jerry & Del-Fi's from Connecticut. This great recording was done in the early 60's but could have been done around 1957 the way it sounds.

Dave Bryan is another completely unknown primitively recorded hopper. Originally done for Speck Records from the West-Coast. Sam Baker from Texas is doing his "Island Of Regret" real nicely with a good piano break, another one as we have many on this release Johnny Globe recor-ded his "Wait A Minute Baby" for Super-Sound Records. Joey Bellomo is a drummer who made several records and backed up many artists. His recording included here was originally done for Glo Records.

From the West-Coast again comes Chris Tyler with his "Five, Ten, Fifteen Hours". "AI American Boy" by Bill Parsons is known to almost every 50's rock music lover and many people who like other kinds of music. The Boppin' Billies recorded "All American Hillbillies" which you have to listen to to believe it.