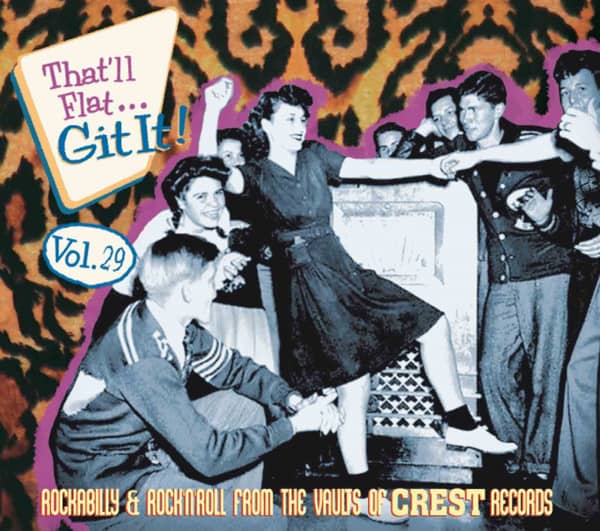 Another gem in our groundbraking Rockabilly and Rock'n 'Roll label series.
32 tracks from the vaults of Crest Records.
Featuring early recordings of stars like Glen Campbell and Eddie Cochran.
Contains several tracks that have languished in vaults since their recording.
Perfcetly re-mastered for clear and vibrant sound.
Extensive 36-page booklet with liner notes by expert Mark Armstrong.

This 32 track CD album explores the more up-tempo recordings of Hollywood based label Crest Records, which was owned by Sylvester Cross. The label issued an incredible array of music from an equally amazing variety of artists, and this CD focuses mainly on the white artists which left their musical legacy on the Crest label.
As was often the case of small independent labels very few national hits emerged, however some artists became famous worldwide; Glen Campbell, and Eddie Cochran, instantly come to mind, and we include Eddies first solo release Skinny Jim. Premature mortality was high among the early rockers and Tommy Dee gained recognition through his tribute recording of Three Stars (not included).

Less well- known artists gained fame through latter-day reissues of their pulsating rockers; Latino Tony Casanova, Yea! Yea! Come Another Day, is a perfect and powerful rocker, country cat Tom Tall became hep to the beat with his Gretsch guitar infused rocker Stack A Records, and those raucous brothers Bobby and Terry Carawa tonsils on Ballin' Keen, are raw and boisterous. The Chromatics were a Negro Rhythm Combo featuring Hal Jackson, and the groups Wild Man Wild delivers exactly what the title proclaims, something wild!

There are also several tuneful and beat injected instrumental tunes with catchy get up and dance riffs, which are far from fillers within this album. Perhaps these and many of the other featured recordings were too wild for the petticoat and bobby socks era, and as such was the reason they failed to gain recognition?
Our Crest Rockabillies CD re-issues several tracks that have languished in vaults since their recording, and the sound is clear and vibrant. This CD album is made by rockers for rockers testifies this statement. Be certain you can always buy any Bear Family product with confidence, for they are musical products made by music lovers who care about quality and the integrity of music. Mark Armstrong

Great to have these rare rockers packaged in true Bear Family quality. This is my first purchase in this series of releases but I will be starting to buy the rest as the audio quality, considering the age of these tracks, is quite superb