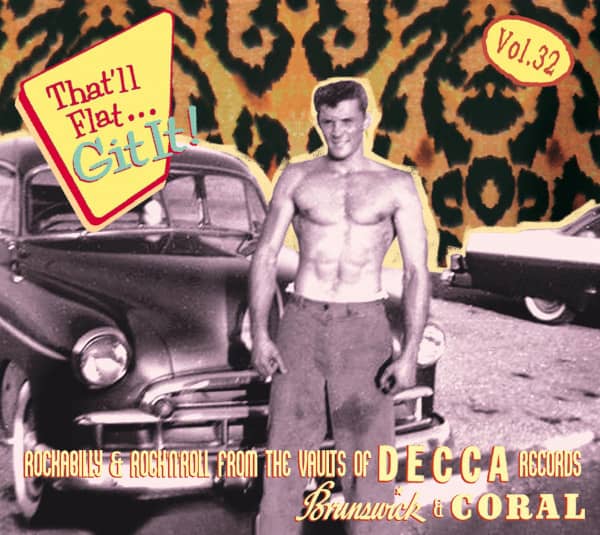 1-CD Deluxe DigiPac (4-sided) with 40-page booklet, 33 tracks, playing time 75:36 minutes.
• Our 'That'll Flat Git It!' series which is grouped by record labels stands for the greatest rock 'n' roll and rockabilly recordings from the fifties on CD par excellence!
• Volume #32 once again features material from the archives of Decca, Coral, and Brunswick.
• Among the artists are Brenda Lee, Johnny & Dorsey Burnette, Ronny Self and even Buddy Holly!
• Apart from big names we present the greatest unknowns like the fantastic guitarist Sandy Coker, the Tyrones, The Bay Bops or Chuck Johnston. Awesome!
Bear Family’s fourth plunge into the combined Decca, Coral, and Brunswick vaults for its ‘That’ll Flat…Git It’ series provides more than a few surprises alongside some of the hottest rockabilly and rock and roll of the 1950s. Decca maintained a strong presence in Nashville under the A&R aegis of Paul Cohen and Owen Bradley, recording a plethora of stars there—pint-sized Brenda Lee, the brawling Burnette brothers, Wayne Walker, Ronnie Self, even Buddy Holly, and they’re all here. New York and Los Angeles are well-represented as well.
As usual with this series, it’s the obscure stuff that collectors will flip over—dazzling guitarist Sandy Coker, Canadian import Arnie Derksen, a stormer from Mitchell Torok, The Tyrones’ tough Rocker Broke Down Baby, and eye-openers from The Bay Bops, The Barker Brothers, Chuck Johnston and The Jay Cees, Johnny Duffett,  Arthur Osborne, and Dodie Randle’s two overheated anthems. Those bottomless Decca vaults never disappoint! Now, put on your rockin' shoes!

$17.57 * $14.12 *
Show all "Various - That'll Flat Git It!" articles
Presse Archiv - Various - That'll Flat Git It! Vol.32 - Vive Le Rock issue #65
Presse Archiv - Various - That'll Flat Git It! Vol.32 - Vive Le Rock issue #65 VARIOUS ARTISTS THAT'LL FLAT GIT IT — VOL 32 (Bear Family) The burgeoning series keeps delivering. 8/10 The train keeps rolling on for Bear Family's long-running series and it shows no sign of slowing down let alone hitting the buffers. This is the series' fourth plundering of the Dec-ca, Coral and Brunswick rich seem of music. Of the 33 tracks the artists range from virtual unknowns like Dodie Randle who had their moment in the studio and vanished, her 'Man Hunt' is breathless and flushed like it should be, to three rumbustious Buddy Holly recordings from 1956 including 'Ting-A-Ling' a rockabilly stomper. This volume illustrates the musical experimentation that was taking place within the rock 'n' roll sphere, tracks here were recorded from New York to Nashville and LA, there was so much talent hitting pay dirt occasionally was a certainty, the downside some musical gold was missed in the melee too. Simon Nott
29.07.2019
Similar products Customers also bought Customers also viewed
Similar products
Chuck Berry: The Autobiography (PB) Art-Nr.: BOOK02001