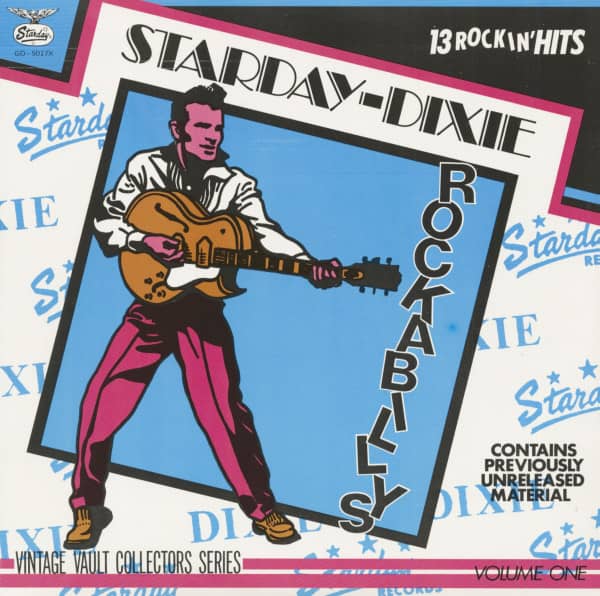 (GUSTO) 13 tracks (2 unreleased) - US pressing - originally sealed!
H. W. "Pappy" Daily has been a wholesale record distributor in Houston since the forties. As the Texas music scene began to explode in the early fifties, "Pappy" was the major outlet for selling records, having opened Big State Record Distributing in Dallas in addition to his Houston operation. In such a position, he had a great influence with record labels and was responsible for getting many local artists signed to major labels. "Pappy' is credited with starting the careers of Jim Reeves, George Jones, Webb Pierce and Hank Locklin during these years.

Encouraged by these successes, he entered into the publishing and record business and, in the early fifties, Daily joined with Beaumont, Texas promoter, Jack Starnes, to form Starday Records (the name Starday comes from their last names). Starnes promoted such Texas artists as Lefty Frizzel, George Jones and Arlie Duff and the latter two were quickly signed to the new label.

Other Texas and Louisiana artists signed with Daily's publishing com-pany or joined the Starday label because "Pappy's" distribution firm was the focal point for the music business in that area. Many of the local artists were also discjockies. In the early fifties, records were look-ed upon as an inexpensive alternative to live music and the earlier coun-try music deejays were often recorded to take advantage of their local popularity and the airplay they could provide. Examples include Bill Mack (who today is an air personality at WBAP in Dallas/Ft. Worth), Biff Collie ( a founder of the annual Nashville DJ Convention)., and J.P. Richardson (better known as the Big Bopper who first recorded for Daily's "D" label.)

The Dixie label was a subsidiary of Starday and was formed in 1955 to create an outlet for new artists on a regional basis. Those releases that were successful were often switched to the Starday label. Dixie was largely distributed in the southern states.

The majority of the early Starday and Dixie releases were cut at Bill Quinn's Gold Star Recording Studio in Houston, as "Pappy" had a substancial interest in the studio.

The Starday label moved to Nashville in the late 50's, under the dir-ection of Don Pierce who had become president and co-owner in 1953, and expanded from recording chiefly regional artists to recording Grand Ole Opry stars. Jack Starnes sold his interests to Pierce and Daily and "Pappy" sold his interest in Starday to Pierce in 1957. "Pappy" then concentrated on his"D"label for local releases and placed many of his masters with Mercury Records through Sid Talmage and, later, with Musicor Records. In the late sixties, Starday acquired the King/Federal/Deluxe record groups and then in 1975, Gusto Records purchased the Starday/King master catalog.