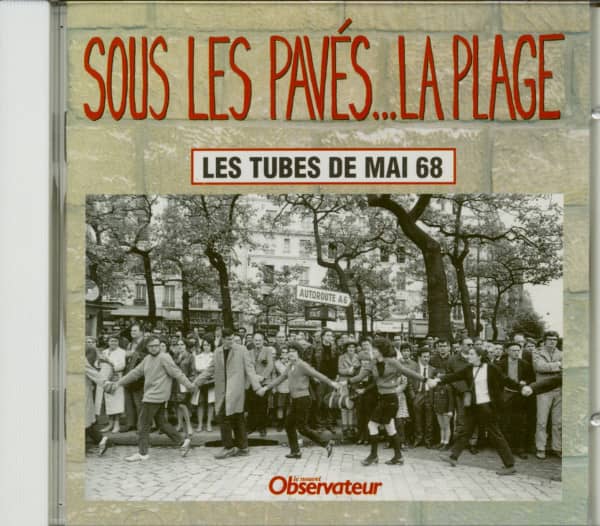 Please inform me as soon as the product is available again.
$25.28 *

(Fnac) 23 tracks incl. bonus tracks, 15-page booklet in french language
When France Gets Bored
was headlining Le Monde on March 14, 1968. The following week, on March 22nd precisely, a hundred students from the University of Nanterre led by a rabid redhead nicknamed Dany began to prove him wrong. That year, spring would be warm. Two months later, "I'll abolish boredom", a young stranger's chorus falls from all heads in search of new ones. Europe 1, the first radio station to cover events in the field, and on strike since 15 May, is playing with a handful of hits in a loop between the news flashes, Julien Clerc's first track released a week earlier. In France, imagination is in power. Not for long because, before the end of the month, the parliamentary left will have tried to recover the movement, the signature of the Grenelle agreements will have established the consensus between the Communist Party and the Pumpidolian government to stop a con-testation which exceeds them, de Gaulle will have secretly met General Massu in Baden-Baden to secure the support of the army and, idea of genius, made refuel the petrol pumps so that the Parisians can change their ideas by leaving at the wheel this revolutionary cauldron that is the capi-
the Pentecost weekend. The shaken regime closes in three days the parenthesis of this beautiful month of May. The movement will gradually unravel until the holidays. But the "jeu-nesse de France", in Malraux's words, "was once again exemplary". Enough actions, enough words! The sponta-born generation of 1968 conjugated every day several new expressions: "expulsion" of students from the Sorbonne, "Free our comrades", "demonstration" followed by "barricades" and "tear gas", "repression", "CRS- SS "riot night". cars "burned" by "cocktails" (molotov), street "depaved", "Under the cobblestones the beach", "occupation" of high schools, factories or the Odeon, "It is forbidden to ban", "fire" of the Stock Exchange, "Enrage yourself !", "general paralysis", "Run comrade. the old world is behind you". These privileged children of the glorious Thirty devoured Action and l'Enragé, merrily mixed Marx and Debord, appropriated the images of Epinal de la Commune and 1789, but above all discovered unknown sensations: skipping classes, breaking the outdated discipline of Napoleonic high schools, claiming a forbidden and taboo mixity, taking the floor, finally taking great early vacations for reality.