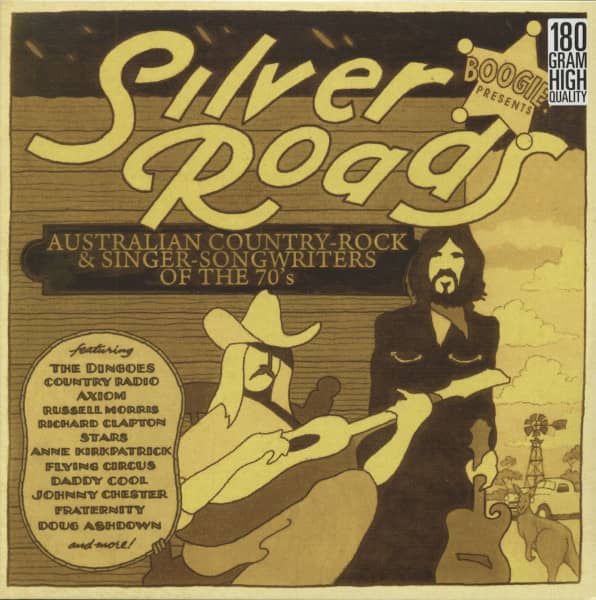 (2014/Warner Australia) 28 tracks - Gatefold Cover
Festival Records and Warner Music Australia are excited to announce the release of BOOGIE! Presents Silver Roads: Australian Country-Rock and Singer-Songwriters of the '70s, a follow up, or a companion piece, to 2012's Boogie! Australian Blues, R&B and Heavy Rock from the '70s. While Boogie! was decidedly blues focused, Silver Roads looks at the other side of return-to-roots coin - the incorporation of country and folk influences in the Australian rock scene of the late 60s and 70s, It looks at a local scene in which artists followed the lead of the likes of Bob Dylan, the Band, CSN&Y and Gram Parsons and created some fantastic music, It includes some iconic Australian hit singles - like long-lost classic Gypsy Queen by the late Greg Quill & Country Radio , Arkansas Grass by Axiom, Boy On The Run by the Dingoes, Winter In America by Doug Ashdown, Slipping Away by Max Merritt & The Meteors, Girls in Our Town by Margret RoadKnight, even Khe Sanh by Cold Chisel and the Little River Band's breakthrough It's a Long Way There, The double LP also features some fascinating obscurities, such as The Birth of The Ute by the Melbourne pub outfit the Autodrifters, featuring the late, great Peter Lillie, plus many more. The album was co-compiled by noted author Clinton Walker ('Buried Country: The Story of Aboriginal Country', 'Highway to Hell: the Life & Death of Bon Scott') and Boogie! compiler Dave Laing, It features new artwork from Boogie! cover artist (and legendary '70s LP cover and poster artist) Ian McCausland. Boogie! Presents Silver Roads is a comprehensive look at a part of Australian music history that had a huge impact at the time, With so many classic artists and tracks, and with the renewed interest in country & folk sounds in recent years, the album will be essential for Australian music fans young and old.