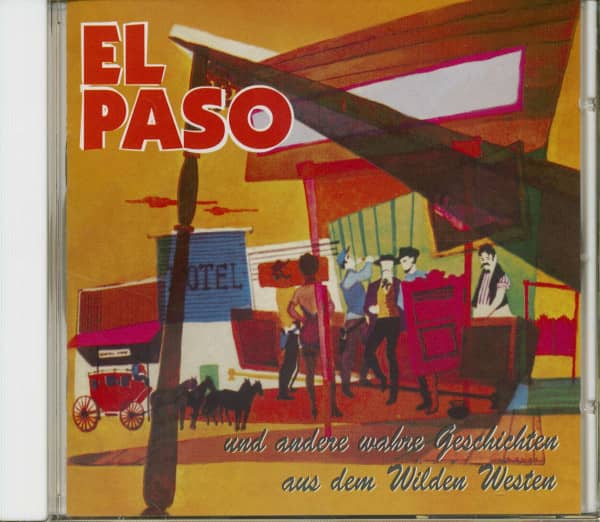 This article is deleted and can no longer be ordered!
Please inform me as soon as the product is available again.
P Secure bonuspoints now
Description Review 0
Description
l Paso - and other true stories from the Wild West The heroes of the Wild West... more
Close menu

l Paso - and other true stories from the Wild West
The heroes of the Wild West stories were mostly called Johnny or Bill, lived in the Blue Mountains and died of longing for Jenny, the unfaithful lover, or by rope, like Tom Dooley, the tragic hero of the worldwide million-seller. Together with those same Blue Mountains, the raging river called River, or the romantic Navajo camp, they were the classic ingredients for the German cowboy hit, which enjoyed great popularity in this country at the end of the fifties, beginning of the sixties.
It was in 1958 that the American Kingston Trio wrote that Tom Dooley and his wilful and complete murder of his beloved - so catchily sang that millions of fans all over the world listened enthusiastically as if moved and the royalty dollars just tinkling.
Such a success cried out for a German cover version, and it didn't take long for the Nilsen Brothers to sing about the tragic hero.
All over Tom Dooley', and everyone sang along.
The well-known pianist, orchestra leader and pop singer Paul Kuhn also rode successfully on the harmonious western wave. Lonely Cowboy (Lonesome Cowboy) was the song Elvis Presley sang in the film'Pulverdampf und heisse Lieder' (Loving You). The version of Paul Kuhn was played by the German radio stations, much to the delight of their listeners, up and down for weeks.
In the case of the Marty Robbins hit El Paso, on the other hand, the original was clearly ahead in German-speaking countries. The interpretation by the Western Trio consisting of Lolita, Jörg-Maria Berg and Rudolf Kreuzberger can be regarded as a successful vocal and musical work, but against Marty Robbins, the singer with tears in his voice, the three alpine countries had no chance.
Her El Paso remained a success, if at all. The pop fans wanted to hear Marty, even if they didn't understand him.
The popular Ralf Paulsen was already better off. With his deep baritone voice he had long sung his way into the hearts of many hit fans. This voice made the song Fury, an audience success - of course in connection with the series of the same name on television with the highest ratings.
Productions of a special kind are the titles Endlos Weit (Nebraska Melodie) and Das Lied vom Tod, spoken by Pinkas Braun and Wolfgang Lukschy. Both were never singers, but both actors are certainly among the most prominent voices on stage, in radio, film and television. One may criticize the lyrics of their spoken stories, but to hear Pinkas Braun and Wolfgang Lukschy on these recordings is and remains a pleasure.