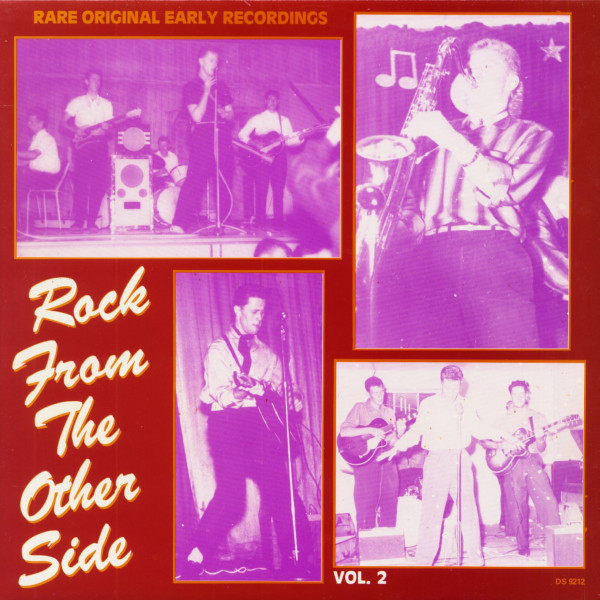 Various: Rock From The Other Side Vol.2 (LP)

Volume 2 starts with some more great recordings by Red Hewitt and the Buccanneers. The article on him and his band on the sleave tells you the story about this great guy. The Two Davies recorded their "Don't You Leave Me" for the same Peak label that released some other great rockers (see vol.1.). The Bob Paris Combo is one of the early groups from New Zealand. They became more known in 1958 when they were signed to accompany Johnny Devlin at the Auckland Live Centre and all his other concert appearances in and around Auckland.

Their first record came out soon after that and was titled Rumble/Rebel Rouser. Included here is another track from a rare EP that was issued by Zodiac Records. The Bob Paris Combo can also be found on vol.1. Paul Zoto has a very special style of playing. He comes from Mooroopna, a small town near Shepparton. Victoria. He started performing in 1956 and recorded the 4 tracks on this LP in 1958 for Viking Records. Ronnie Sundin had several big hits in New Zealand. He comes from Auckland and got first interested in music at the age of 12 when he and his friends formed a skiffle group called the Barnyarders. This group made quite a number of appearances at various Auckland dances. His appearances with Will Jess and his Jesters are the result of a sunday morning rehearsal. Will Jess heard them play and they got together.

Ronnie's first record, Sea Of Love/Waltzing Matilda was a double sided smash hit on all New Zea-land radio hit parades. They are not included in this LP because we concentrate on early rock and roll only and that is what Ronnie Sudin together with Will Jess and his Jesters also recorded as you find out when playing this LP. Tony Williams made mainly pop music with the exception of Is A Bluebird Blue which is included here. Carol Davies ori-ginally comes from New Zealand and made a few records obviously trying to sound like Brenda Lee. She later moved to Australia.

Video von Various - Rock From The Other Side Vol.2 (LP)

Article properties: Various: Rock From The Other Side Vol.2 (LP)