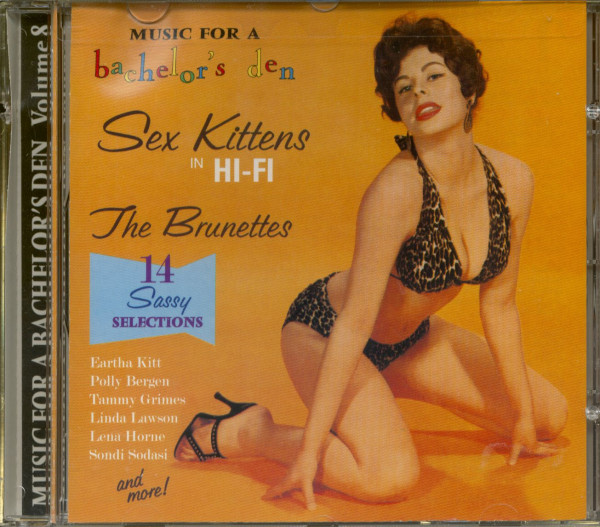 Within a 1950's and early 1960's home, one would repeatedly find the boomerang pattern on kitchen counter tops, draperies, flooring, coffee tables and ashtrays. Outer space exploration was not something that occurred only on television or in the news, but it could also be parked in your driveway. A person could drive a Rocket 88, a DeSoto Fireflite, a Futurematic or a Dynaflow.

America was forging ahead at the speed of light and the sky was the limit. Entertainment was not excluded from this change. Movies were made in Technicolor and Cinemascope. Transistor radios made music portable and more convenient. Big bulky phonographs were replaced by High Fidelity automatic record changers. The aural enhancement of stereophonic sound had arrived. Once high fidelity and stereo came on the scene, records clearly and boldly displayed labels such as "Hi-Fi" or "Stereophonic." The 33 1/3 RPM LP was a new means of providing the most advanced entertainment.

MUSIC FOR A BACHELOR'S DEN is dedicated to the type of easy listening music bachelors listened to and entertained with during the golden age of hi-fi and the dawning age of stereo. While teenagers of the 1950's were becoming accustomed to rock and roll and doo wop, young adults, nestled in suburbia, required an exotic, yet soothing music for entertainment and pleasure.

What bachelor would keep his den stocked with a record rack of albums that excluded Jackie Gleason and his Orchestra? Just as a picture can say a thousand words, Gleason's Melancholy Serenade and You're Driving Me Crazy could set a mood just at that moment when the lights were turned low.