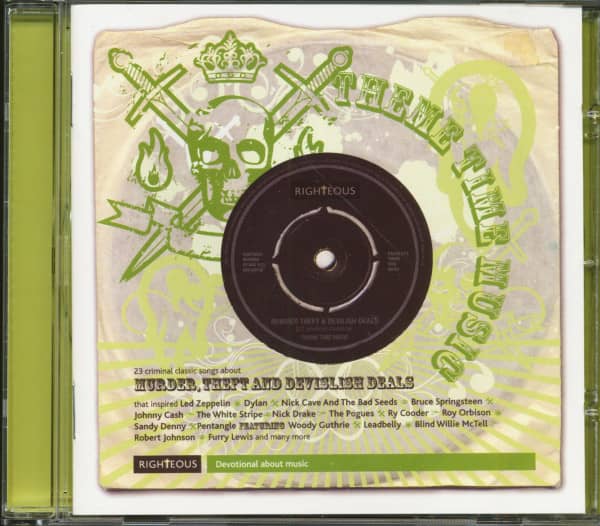 P Secure bonuspoints now
Description
Learn more about Various
Review 0
Description
(Righteous) 23 Tracks - Crime doesn't pay... or so they say. However, stories of how it was... more
Close menu

(Righteous) 23 Tracks - Crime doesn't pay... or so they say. However, stories of how it was committed, talk of cowardly curmudgeons, bandits, gunfighters, murderers and various social misfits have always been at the heart of music. The devil has all the best tunes and some of his compatriots have tales to unfold. And, through the generations of contemporary music, those parables of poor behaviour have continuously been dusted off. This collection of songs brings together such anecdotes that have lived through legend and inspired many a performer to wallow in their dodgy dealings. Take for example 'Bad Lee Brown' a song that was sung by Woody Guthrie that is a strange tale of wife murdering which has been covered by Bob Dylan, Uncle Tupelo, Johnny Cash and Nick Drake among others, in its guise as 'Little Sadie' or 'Cocaine Blues' where the perpetrator is more intimately called Willy Lee. In a swift role reversal, Frank Crumit's 'Frankie And Johnny' has the woman (Frankie) shoot her lover (Johnny) dead after she catches him making love to another woman. It's Chicago all over again. The song was also recorded as "Frankie And Albert' and has been covered by Dylan, Jack Johnson, Elvis Presley and Van Morrison among a huge list of others. 'Pretty Polly' is yet another tale of murder, where Polly is lured into the forest, murdered and buried in a shallow grave. The song became notorious in the UK as 'The Gosport Tragedy' and inspired versions by Sandy Denny and Pentangle, while it also found many interpreters in the Appalachian mountains of the USA and formed the basis of Bob Dylan's 'The Ballad Of Hollis Brown'. Another early influence on Dylan was John Jacob Niles whose distinctive vocal can be heard on 'Bonnie Farday', a song also known as 'Babylon' which tells the story of a man who proposes to three sisters in turn. As he is denied he kills them until he gets to the last when he realises that he is actually their brother and kills himself. All good wholesome everyday stuff.