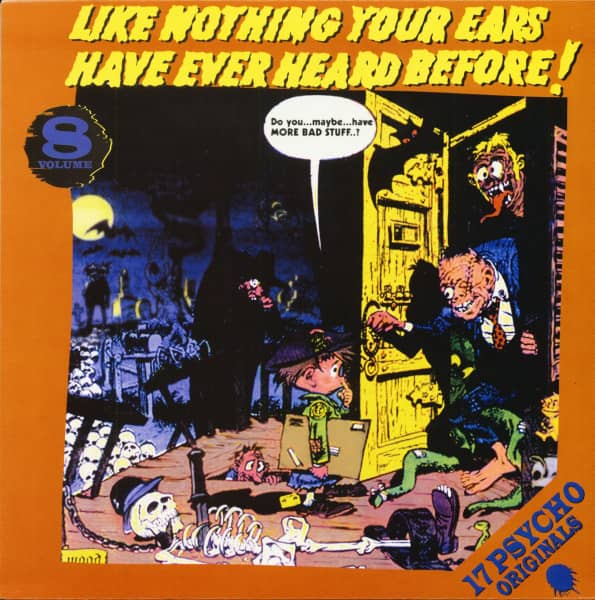 Various: Like Nothing Your Ears Have Ever Heard Before! Vol.08 (LP)

TEAR IT UP by THE JOHNNY BURNETTE TRIO was released as the first single on CORAL back in 1956. It's a classic in rockabilly music and it was covered by a couple of bands among them were THE CRAMPS who played this song in the motion picture "Urgh! A Music War".
CRAZY CRAZY LOVIN' by JOHNNY CARROLL AND THE HOT ROCKS is a great sizzler by Mr. Hot Rock himself. Johnny was DECCA's reply to RCA's Elvis Presley. In April 1956 he recorded six songs with the DECCA session men including Grady Martin, Owen Bradley and Harold Bradley. These recordings are among the finest examples of rockabilly that didn't come from the SUN studio in Memphis.
TEN LITTLE WOMEN by TERRY NOLAND is a crisp, bright and snappy rockabilly tune by Noland, who came from Abilene. Terry recorded five more singles and an album for US BRUNSWICK before moving to APT. This song was done by LITTLE TONY AND THE TENNEESSEE REBELS who later became THE BLUE CATS.
SOME OTHER GUY by THE BIG THREE is one of those Mersey Beat songs which were covered by bands like THE MILKSHAKES or THE KAISERS. This tune was original released on DECCA in 1963.
MONEY (THAT'S WHAT I WANT) by THE SHAKERS was original released on POLYDOR. The Shakers are one of those countless Mersey Beat bands who never reached such a popularity as the Searchers or the Beatles.
MODERN ROMANCE by SANFORD CLARK wasn't a big hit for Clark who made his reputation on just one recording - Lee Hazelwood's composition of "The Fool". But it was good enough to be used as a coversong for RESTLESS.
HONEY-BUN by LARRY DONN was originally released in 1959. It did reasonably well in the mid-south and is an absolute must for rock'n'roll collectors. He made several recordings for SUN but nothing was issued. But this song was covered by RUSTI STEELE AND HIS TIN TAX.
THAT MELLOW SAXOPHONE by ROY MONTRELL is a real gone killer. Have you ever heard such a frenetic saxophone ? This SPECIALTY recording was covered by HOWLIN' WILF AND THE VEE-JAYS and the STRAY CATS who modified the lyrics and called this song "Wild saxophone".
THE BEAT by MIKE PEDICIN was covered by CLIVE OSBORNE & THE CLEARNOTES. Mike started blowing that sax way back in high school, and gained quite a reputation for his after school jam sessions in the gym for all the gang with a group he organized called The Four Sharpes. They stayed to-gether after graduation and turned professional.
LIL' RED RIDING HOOD by SAM THE SHAM & THE PHARAOHS was the fifth single release for Domingo Samudio who came from Dallas, Texas. His chart breaking hit single "Wooly Bully" made the band one of the hottest acts in the U.S.A. and those wild Middle Eastern costumes they wore for all their in-person performances made them one of the most colorful groups in the land. "Lil' Red" was covered by such bands like THE RATTLERS and THE METEORS.
GO GO GORILLA by THE SHANDELLS is a very strange jungle beat out of the American garage punk swamps. It was covered by UG & THE CAVEMAN.
HAVE YOU HEARD THE GOSSIP by CHARLIE BROWN AND HIS CISCO KIDS was released on the Texas based record label ROSE. The bang-up bass slappin' on this tune was done by Betty Bishop, a busy housewife of Breckenridge, Texas. This great primitive rocker was covered by THE DELTAS.
NO MORE, NO MORE, NO MORE by BOBBY LORD is a marvellous rockabilly tune and it's hard to believe that Bobby Lord, who was such a clean-cut down-home country entertainer on his own syndicated T.V.show in the sixties, could once have been the oddball eccentric who created such a fine piece as "No More, No More, No More".
WIGGLING BLOND by BUBBA FORD & THE SOUNDS was recorded for the MCM label, a subsidiary of PEACFUL VALLEY RECORDS out of the Music State number one of the USA, Tennessee. This one was covered by THE FRANTIX.
I WANNA COME BACK (FROM THE WORLD OF LSD) by FE FI FOUR PLUS 2 is a real gargage punk classic and an anthem that has been taken to heart by countless young bozos of today. From Albuquerque, New Mexiko, this band made only one other record and disappeared into the sunset.
SUZY CREAMCHEESE by TEDDY & HIS PATCHES takes an idea from Frank Zappa, adds some "Louie Louie" consciousness, and ascends to realm of pure teen dementia. This psychotic piece was covered by the more psychedelic outfit THE PURPLE THINGS.
At least we take a trip on ... LOOSE LIP SYNC SHIP by THE HOGS. This song sounds like an early Mothers of Invention track. After 3 minutes of typical instrumental riffing, a person identified as The Phantom (not this Phantom) enters the studio and proceeds to turn the session into a Mothers-style ffeokout. If net Zappa, it's a damned good impersonation. This freakout tune was covered by THE STING-RAYS.

Video von Various - Like Nothing Your Ears Have Ever Heard Before! Vol.08 (LP)

Article properties: Various: Like Nothing Your Ears Have Ever Heard Before! Vol.08 (LP)