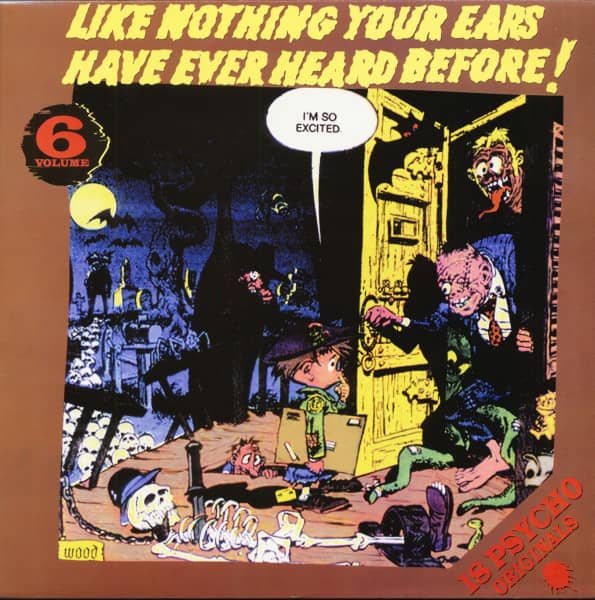 Various: Like Nothing Your Ears Have Ever Heard Before! Vol.06 (LP)

Hi there folks, it's time to have another trip into the vaults of psychobilly music. Don't hesitate, spin that 33 rpm and go wild ! JUST GO WILD OVER ROCK & ROLL by BOBBY DEAN is a real wild rockin' tune and a very good opener for this compilation LP like it was for THE BLUE CATS on their first LP release in 1980.
EVERBODY'S ROCKIN' by THE CHAMPS is a wild rockin' instrumental with additional vocals. There's no getting out - there's a winning contagation in the exciting beat of THE CHAMPS. Join the happy foot-stompin' and rockin' ways like THE RICOCHETS or THE BLUE CATS have done it.
I HAD TOO MUCH TO DREAM by THE ELECTRIC PRUNES was their second 7" release back in 1966. It reached No.11 at the 'Billboard's charts'. In the early 80's this astonishing chartbreaker was covered by NAZ NOMAD 8 THE NIGHTMARES and THE CANNIBALS.
GIRL I WANT YOU by THE SEEDS is arther garage punk tune from the vaults of trash. This one is a SKY'SAXON original who formed the band and played bass, harmonica and lead vocals. This one was covered by the more psychotic band THE PURPLE THINGS.
SHE'S MY WITCH by KIP TYLER 8 THE FLIPS is one of those songs which were covered by a couple of bands, but any coverversion got these very cool guitar licks in it like the original one. The first time I've heard this song as a cover was on the BIG BEAT LP "I could go to hell for you" by THE SIC KIDZ.
WARRIOR SAM by DON WILLIS was recorded in Jackson, Tennessee, for SATELLITE RECORDS (later STAX). DON WILLIS, NEIL HERBERT, JIMMY DYE, GENE ACRE and the guitarist SHELBY BYRD nipped over to Orchard Street and flattened they are like an exploding H-Bomb with "Warrior Sam" which was covered by TAV FALCOS PANTHER BURNS.
WILD, WILD LOVER by BENNY JOY may be the first psychobilly song of all time. It was recorded in 1957 by BENNY JOY and his mate BIG JOHN TAYLOR somewhere in a living room. Probably this song inspired THE METEORS to write such a song like "Death dance".
LONG BLACK TRAIN by CONWAY TWITTY seems to be the latter a convin-cing fusion of "Mystery train", "My baby left me" and "Orange blossom special", but it is one of his better songs hidden among such big hits like "It's only make believe", "Mona Lisa", "Born to sing the blues" and "Lonely blue boy". "Long black train" was part of the first DELTAS LP back in 1981.
THUNDER & LIGHTNING by TOOTER BOATMAN & THE CHAPARRALS is the best known song by TOOTER BOATMAN who died in a car accident in 1959. The song was covered by THE BLUE CATS on their "Fight back" LP.
LATER by THE JODIMARS was recorded in 1956 by tenor saxist JOEY D' AMBROSIA, drummer DICK RICHARDS and bassist MARSHALL LYTLE ... 3 of the Haley Comets. They became a very popular hot attraction on the Eastern Side of the States ... a la BILL HALEY ... eluded them and by mid 1957 they had disbanded. This song was done by RESTLESS and THE BEL-AIRES.
MUNSTERS THEME by JACK MARSHALL is the original title theme of this famous TV series which was originally aired between 1964 and mid 1967 in the United States. This one was covered by such bands like THE KEYTONES, THE RADIUM CATS and Nigel Lewis' ESCALATORS.
(I'M NOT YOUR) STEPPIN' STONE by THE MONKEES is one of those songs you could find on their "best of ..." records, but you could find it as a cover song at a KREWMEN record too.
PETER GUNN/LOCOMOTION by FREDDIE STARR & THE MIDNIGHTERS was covered by THE DELMONAS out of the Medway scene and could be found on the "Big Beat Beach Party" compilation. FREDDIE STARR cut only three 7" under the direction of JOE MEEK for DECCA RECORDS.
JOHNNY REMEMBER ME by JOHN LEYTON ,who was born. February 17.1939 in Frinton-on-Sea, Essex, was his first hit record which held the No 1 spot for around two months. He was one of the most important English singers from the early 60s with his own sound. So, it's not surprising that this tune was covered by the most famous psy-chobilly band THE METEORS.
CADILLAC by BO DIDDLEY was originally released in 1960. BO a.k.a ELIAS McDANIEL, born December 30, 1928, McComb, Mississippi, made his struttering rhythm and this shave-and-a-haircut "hambone" beat part of the common language of rock'n'roll. In 1983 this song was released as a coversong by THEE MILKSHAKES.
ALLIGATOR WINE by SCREAMIN' JAY HAWKINS is one of my favourite voodoo rock'n'roll songs. He's got such an extraordinarily powerful voice, capable it seems of inflicting actual bodily harm and, but for the fame that came his way as a result of the persona established by "Spell" might well have found success as a more conventional rythm and blues or ballad singer. Nevertheless this one was covered brilliantly by THE VIBES.
BONUS TRACK: A CHEAT by SANFORD CLARK which was mispressed on volume one of this exciting compilation series - LIKE NOTHING YOUR EARS HAVE EVER HEARD BEFORE !!!

Video von Various - Like Nothing Your Ears Have Ever Heard Before! Vol.06 (LP)

Article properties: Various: Like Nothing Your Ears Have Ever Heard Before! Vol.06 (LP)