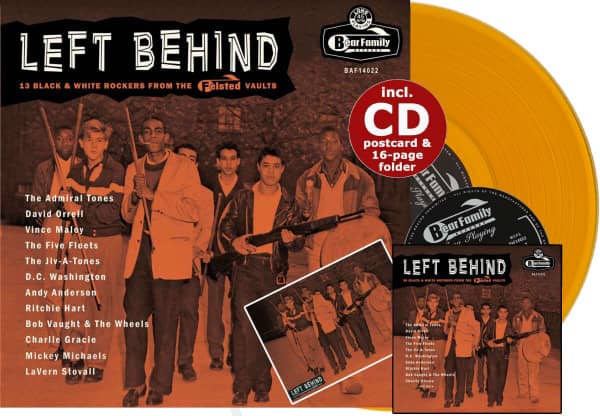 1 vinyl LP (10") with bonus CD and 16-page booklet. 13 tracks (LP), 34 tracks (CD). Total playing time: approx. 28 min. (LP), approx. 79 min. (CD). Limited deluxe-edition, pressed on orange vinyl with photo postcard.
Felsted Records wasn't your standard-issue rock and roll label. The imprint was a subsidiary of the London logo, itself an offshoot of the British Decca label founded way back in 1929. Felsted was launched in the U.K. in 1954 and in the U.S. in late 1957. American Felsted focused on capturing a younger pop audience than its parent company, primarily licensing in masters rather than producing its own.
A fair amount of its output was exciting rock and roll that for the most part didn't sell all that well despite having some real fire. This fascinating collection boasts more than its share of blazing rockers by Vince Maloy, Andy Anderson, Ritchie Hart, Charlie Gracie, Bobby Russell, Myron Lee and The Caddies, Bill Taylor, The Jiv-A-Tones, The Casualteens, The Spacemen, and plenty more, shedding new and welcome light on a vintage label overlooked by reissuers for much too long!

what a great package for all time juvis