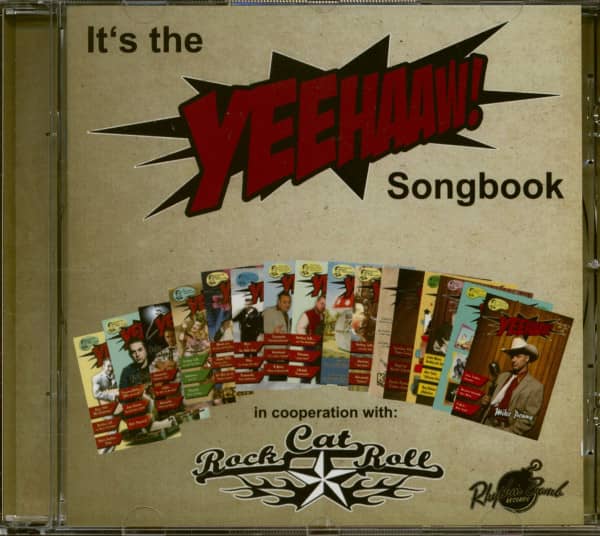 Various: It's The Yeehaw Songbook (CD)

(Rhythm Bomb) 24 tracks, CD of the German 'Yeehaaw!' Rock & Roll magazine, which is actually the only one that continuously introduces new bands in interviews! Beside more or less known songs of current bands, there are four tracks here, which appear for the first time on CD!
Recommended for connoisseurs who simply want a good sampler as well as for all those who want to familiarize themselves with the music of the current rock & roll and rockabilly scene!
Since 2011 the fan magazine'Yeehaaw! Scrapbook! features stories and interviews on all aspects of the 50's lifestyle - with current artists as well as with old heroes. The entire range of 50's music can be found in the magazine as well as on the first CD sampler: classical rock'n'roll and rockabilly as well as doo-wop, western swing, jive, or rhythm'n'blues. It's The Yeehaaw Songbook' contains 24 highlight songs with over 58 minutes of total playing time, artists like JAKE CALYPSO, RUBY ANN, CHERRY CASINO, DOUG WILSHIRE or BALLROOM KINGS are represented.