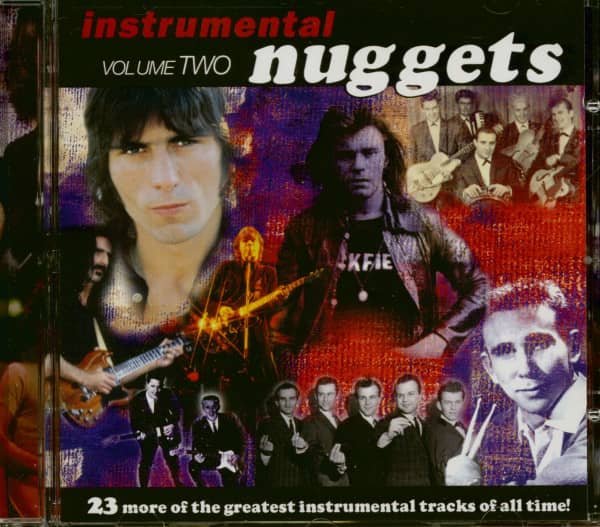 (Repertoire) 23 tracks
-
23 of the best known instrumental smashes feature on one superbly packaged CD. It includes 1960s hits from the like of Johnny & The Hurricanes and Sandy Nelson and 1970s chart hits from Cozy Powell, Frank Zappas ‘Peaches En Regalia‘ amongst others. Nearly every track is a Top 20 smash hit. Watch out for this super package.
-
Who cares about the singer?

Now who would dare say such a churlish thing? Most likely the guitarist, keyboard player and drummer in any group you care to mention. As concerned, it is the singer, with his gold lame suit and torrent of fancy lyrics always the star attraction. Mick Jagger, Freddie Mercury, Rod Stewart, Michael Jackson - these are the guys who steal the show and dance their way into the headlines. It's the vocalist who captures the hearts of screaming girls and not the rhythm guitarist

But without a band... well, there could be no pop music of kind (unless, as is increasingly the case, producers and singers turn to samples and drum machines for support). However, in the heyday of pop and rock from the 1960s onwards, there was a vast pool of musical talent, often feeling frustrated and desperate to play more than a few solos and a basic backing beat. The answer was simple. Cried out the rebellious musicians: 'Why not form our own band - without a singer!?'

The result was a whole plethora of instrumentali groups who often became just as successful as their vocalising comrades. Defying all logic and received wisdom, such groups as The Tornados and The Ventures soared to the top the charts.

The secret was to record tunes that had just the right kind of catchy feel to tickle the public's fancy. An instantly recognisable sound was also crucial. Whether it aws the eerie keyboards of  The Tornados or the echoing guitars of The Ventures, there ensure a hit - even with the most unpromising material. And not only guitar and keyboard bands scored instrumental hits.

Show bands, orchestras and even solo drummers made their way into the Top Ten, while groups more usually noted for their vocal work also tried out instrumental numbers. Our CD certainly brings together a diverse and fascinating collection of bands and artists, playing such ditties as 'Telstar' and 'Cast Your Fate To The Wind' which grabbed the public's attention without so much as a peep from a singer.