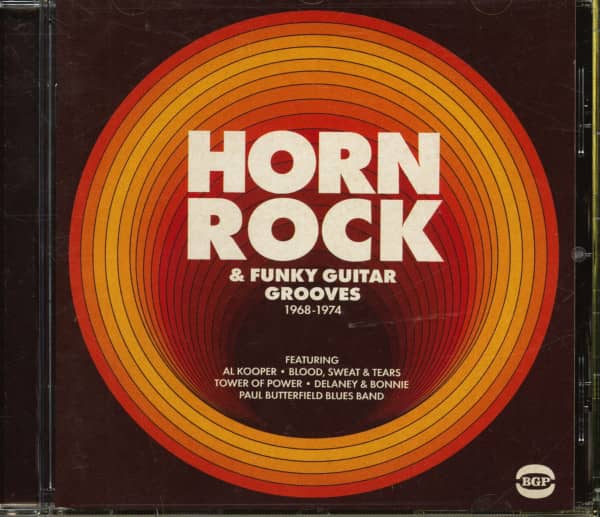 American rock is returning to its soulful roots.

1968 was the year in which rock music returned to its roots. Many quote Dylan and the band and their search for a mythical America, but for others it was a return to jazz, soul and R&B with which they grew up and which they first brought to music. "Horn Rock & Funky Guitar Grooves" explores these escapes from psychedelia in a 17-track compilation that stretches geographically from New Jersey via San Francisco down to Memphis and New Orleans when rock became danceable again.

The term horn rock traditionally refers to the jazz style of big band rock associated with bands such as Blood, Sweat & Tears (represented by Roller Coaster) and Chicago: music that showed the influence of jazz on post-war children who became rock stars in the 1960s. It's clearly there with Al Kooper's attitude to Hayes & Porter's 'Toe Hold', San Francisco's the Sons with their De La Soul samples 'Boomp, Boomp, Chomp', Chase's frenetic 'Run Back To Mama', Lighthouse's floor filler 'One Fine Morning' and Donnie Brooks' previously unreleased 'Blow Your Mind'.

Others searched for their influence on the touring R&B bands. This was most evident in Delaney & Bonnie's Memphis recording "It's Been A Long Time Coming" and the bands that emerged from Bill Graham's San Francisco label: Cold Blood, Tower of Power and Hammer. The last of these replaced the horns with guitars and organs, as did the Crystal Mansion on the East Coast. The Paul Butterfield Blues Band and alumnus Mike Bloomfield in the Electric Flag embraced the horns after starting out as pioneers of the electric guitar.

"Horn Rock & Funky Guitar Grooves" encompasses an era and a sound that is often overlooked when it comes to self-confident, heavier and harder sounds. These records are now sampled for their good grooves and supported by retro DJs for their adaptability to the dance floor.