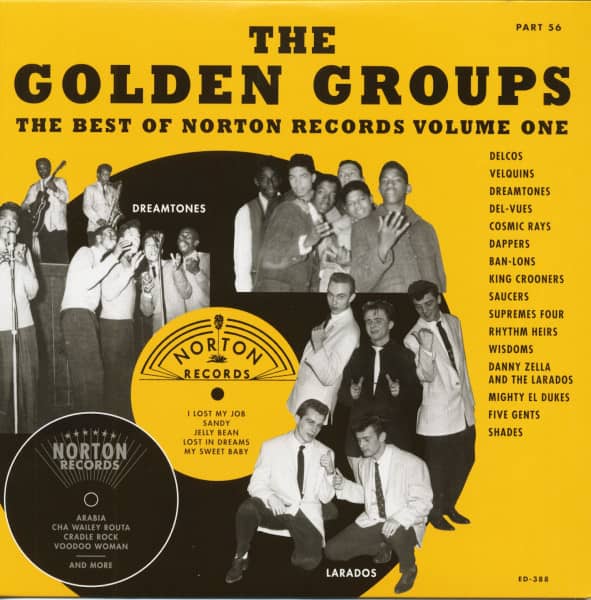 (2013/Norton) 17 tracks - amazing and rare multi label 1950s Doo Wop collection.Vocal group jumps and ballads from the vaults of Norton Records in a package inspired by the legendary Relic Records! - A Miriam Linna concept and a Billy Miller endeavor-
This album and its companion second volume continue the land-mark GOLDEN GROUPS vinyl LP series spearheaded by Relic Records in 1973. These pioneering releases chronicled legendary R&B labels such as Parrot, Apollo, Lu Pine, Herald, Specialty and many other re-vered independent companies with photos, detailed notes and rare and unreleased songs. When Norton Records started in 1986, it was Relic's Donn Fileti who hooked us up with our first artist Flasil Adkins Donn and his co-hort Ed-die Gries were constant sources of inspiration as we learned the ropes and they patiently (at least Donn was patient!) answered our questions as we first launched our label.
Now, after nearly thirty years of excavating old masters, Norton has brought to light - aside from the clang and clutter of our loud sound heroes - a fair number of vocal group offerings. With the blessing of Donn and Eddie, we have continued their groundbreaking series with two new volumes, rounding up many of our own finest chant teams. We now present, for the first time ever, THE GOLDEN GROUPS OF NORTON RECORDS. In late 1962, the Delcos (named after the popular battery brand) from South Bend, Indiana, recorded Arabia/These Three Little Words for manager Juanita Flenson's Ebony label. Within months they recut both sides for Showcase Records Legendary Pittsburgh DJ Porky Chedwick drove Arabia to the Number One chart position on WAMO, and iconic DJ Mad Mike also made it a staple at his dances. Norton presented this great hoof shaker in our MAD MIKE MONSTERS series. Also on these sets were the Ban-Lons from Houston with I Like It, the better of their two rare singles on Fidelity and Mad Mike favorites the Saucers out of Dallas with Cha Walley Routa, the infectious B-side of Why Do I Dream.
The Dreamtones from Springfield, Massachusetts formed with a merging of members from the Centurys and the Mint Juleps. They had a great lead vocalist in Major Branch, and Sidney Poitier's cousin Val was also a member. After their debut Love In The Afternoon on Klik in 1957, the Dreamtones issued a spectacular two-seder in Praying For A Miracle/ Jelly Bean on Express. Their final release as the Dreamtones was A Lover's Answer on Astra in 1959, though they can also be heard provid-ing jungle hoots behind Joe Therrien on his very rare Sentinel release, Siam. The Dreamtones, Dappers, Supremes and Five Gents tracks on our GOLDEN GROUPS collections were previously issued on the Norton/ Massabesic set THE RHYTHM TEENS.
Upstate New York's Mohawk Valley boasted a very vibrant vocal group scene in the late fifties and early sixties with locally pressed re-cords by the Teenage Moonlighters, Bebo Singleton and the Notes, the Supremes, the Rhythm Cadets, the El Daros and the Royal Satins com-manding high prices amongst collectors. Utica's Del-Vues (featuring one Brian Wilson on lead) 1961 offering My Confession/New Year's Eve on U-Town paired two incredibly crude chants, and stands as one of the all-time rarest records of the region. This was originally planned as a Norton single release with the King Crooners' Lonely Nights on the flip. Jazz pioneer Sun Ra was involved with the rhythm and blues scene as early as 1946, having backed Wynonie Harris on piano in Alabama. When he relocated to Chicago a few years later, Sun Ra began working with many of the city's musical stars like the Dozier Boys, Andrew Tibbs, and Red Saunders. He recorded numerous vocal groups, both acapella and with backing by his Arkestra.
The groups usually worked within a standard R&B framework, yet they also contributed to Sun Ra's more experimental recordings. His stable included the Nu Sounds, the Quali-ties, the Metros and the Crystals, but he mostly worked with the Cos-mic Rays. Their two singles Daddy Gonna Tell You No Lie/Dreaming and Somebody s In Love/Bye Bye were recorded in 1955 but not issued for another five years, and even then, in extremely miniscule quantities on Sun Ra's own Saturn label Lead singer Calvin Barron would later join the...
- Billy Miller