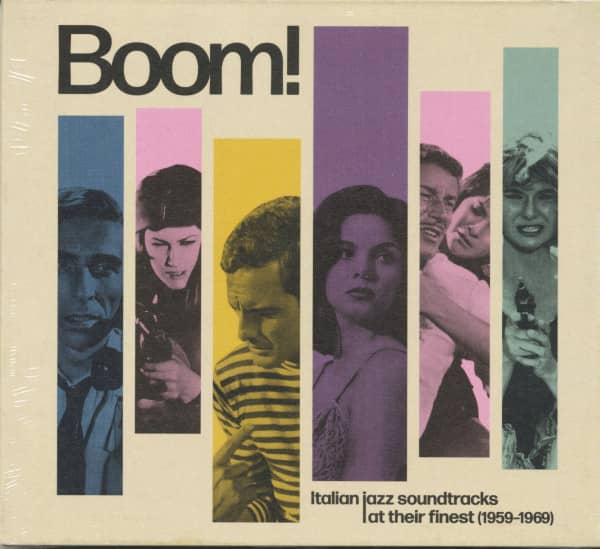 P Secure bonuspoints now
Description
Learn more about Various
Review 0
Description
(Decca Records) 33 tracks, digipack For a whole decade, between the second half of the 50s and... more
Close menu

For a whole decade, between the second half of the 50s and the second half of the 60s, jazz conquered the Italian screens. The Californian be-bop rhythms, filtered and reinterpreted in a typically Mediterranean key, became the perfect soundtrack for the Italy of the economic boom; the quintessential music for a country that was in a moment of profound and exciting industrial, social and cultural renewal. A nation that was rapidly shedding its skin, changing its style, look and identity, but also its landscape, and surrendering to the frenzy of the economic miracle.

The compilation you now hold in your hands was conceived like a stream of sound, a journey of discovery carefully compiled from hundreds of soundtracks from the golden age of Italian jazz contained in the CAM Sugar archive.

33 tracks that go beyond music to tell the story of Italian cinema, society and its distinctive style and charm. A genre that, even with echoes of Californian be-bop, crime jazz or bossa nova, still sounds surprisingly original and Mediterranean, elegant and seductive, either with joyful highlights (the scat of I Cantori Moderni di Alessandroni or of I 4+4 di Nora Orlandi) or with enigmatic and almost dramatic nuances (La Strega In Amore by Luis Bacalov, Il Batticuore by Marcello Gigante).

The compilation also offers a valuable insight into the Italian jazz scene of the time, with a number of impressive soloists such as Gianni Basso (saxophone) and Oscar Valdambrini (trumpet), two Piedmontese who worked for the RAI Television Orchestra conducted by Armando Trovajoli; like Nunzio Rotondo (trumpet), a legendary and elusive figure who had a special relationship with Piero Piccioni; or like Enrico Rava (trumpet), Franco D'Andrea (piano) and Gegé Munari (drums), who often recorded with Piero Umiliani. Not to mention international stars like Chet Baker and Gato Barbieri, who were often drawn into the recording sessions by chance, thanks also to Umiliani's tireless curiosity.

BOOM! is like an explosion, that of Italian jazz in the cinema of those days. But BOOM! is also a term for Italian society, which was entering its mature and modern form, rapidly evolving from a peasant culture to a new urban and industrialized one. "BOOM!" is ultimately also a onomatopoeic pop sound, catchy and immediate like the modern music that shook this exciting and controversial decade.