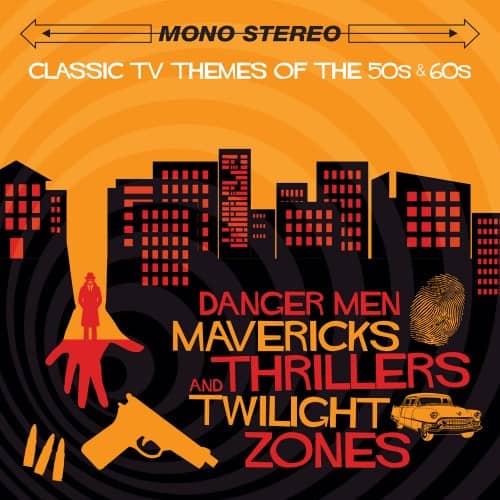 (2017/Jasmine) 40 Tracks - Something of a follow-up to Jasmine's earlier collection of TV and movie themes, Watching The Detectives (JASMCD2615), this generous, 40-track compilation concentrates on TV themes from 'The Golden Age' of television. Around a third of the tracks are from popular TV Westerns, notably Gunsmoke, Wagon Train, The Life And Legend Of Wyatt Earp, Cheyenne, Bronco, Have Gun Will Travel, Maverick, The Rifleman, Rawhide, Bonanza!, Laramie and Zorro! Crime and Detective series were very nearly as popular as Westerns, as depicted here by M Squad, The Untouchables, Naked City, 77 Sunset Strip, Hawaiian Eye, Johnny Staccato, Peter Gunn and a trio of UK-originated shows, Ghost Squad, Maigret and No Hiding Place. Elsewhere, Spies are covered by Danger Man and The Saint (the former, titled Secret Agent is the US), while Fantasy & Sci-Fi encompass Quatermass & The Pit, One Step Beyond, The Twilight Zone, Boris Karloff's Thriller and Out Of This World. Shows like Alfred Hitchcock Presents, Edgar Wallace Mystery Theatre, Route 66, Adventures In Paradise, Philadelphia Story, Dr Kildare and Ben Casey all perhaps fall under the heading of General Drama, while the Dinah Shore Chevy Show and the mighty American Bandstand both come under a musical remit. Finally, America's favourite - and most successful - Comedy show was, by far, I Love Lucy. Many of these tracks are taken from the actual soundbeds of their original TV series, and have never been commercially released before.