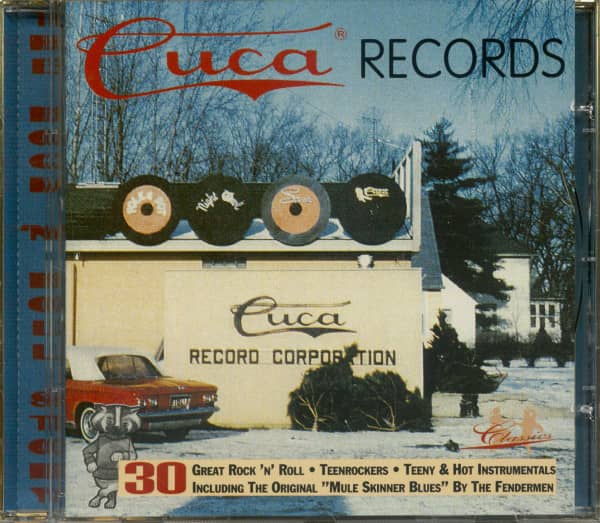 (Classics Records) 30 Songs
THE CUCA STORY
The story of Cuca Records commenced in the mid 50's when Jim Kirchstein returned from the Korean conflict. He opened up a record shop in the basement of his brothers toy shop in Sauk City, Wisconsin, a small town about 20 miles northwest of Madison. Jim bought recording equipment from the widow of the owner of Pfau label. In 1959 he began recording in his small studio - now called Sauk City Studio -choosing the unlikely name of Swastika for his label. The first two records were pressed by RCA.

First out was Don Chambers (1000). When pressing the second issue (1001) Bill Leonard of RCA called and told Jim to change the name of the label. Right on the spot Jim took the name Cuca, which was a nickname for a Mexican cousin of his wife. Jim recorded the original "Mule Skinner Blues" by The Fendermen and with the money he got from that he set up a larger studio and the legendary Cuca label was ready to move into the 60's.

There were over 1000 releases on the label and the subsidary labels which included Sara, Night Owl and Age of Aquarius etc. The Cuca corporation grew in size and in 1964 he built his own pressing plant and started up a radio station called WVLR (Very Live Radio