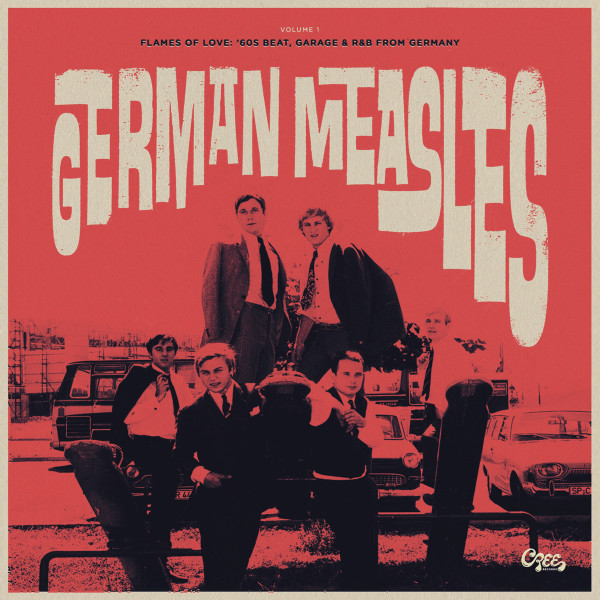 ​DMM (Direct Metal Mastering) Disc Cutting: Günter Pauler at Pauler Acoustics, Northeim
Mastered by Bob Jones, pressed by Pallas, Diepholz, Germany
Beat music may have been born in Britain, but it was schooled and nurtured in the dank clubs of the Reeperbahn, spawning a homegrown beat group scene that sprouted early and proliferated rapidly. By 1964, West Germany was a buzzing hive of beat music. The German record industry, which also commanded some of the best-equipped recording studios in the world, was quick to cash in on the new youth craze, churning out a steady stream of vinyl to the marketplace. Lost, forgotten, misplaced or ignored in this rash of releases was some of the most exciting rock 'n' roll music of the era.

On 'German Measels', Cree Records / Bear Family digs deep to present some of the very best music to come out of Germany in the Sixties, some of it by fiendishly obscure groups who failed to make even the slightest dent outside of their home towns. Compiled and annotated by Mike and Anja Stax of 'Ugly Things' magazine, many of these tracks are seeing their first appearance on vinyl since the Sixties.

'German Measles Vol. 1': 'Flames Of Love' is a veritable inferno of raucous garage beat and moody punk R&B sounds with rare reelin’ and rockin’ tracks by The Blizzards, The Boots, The Pralins, Les Copains, The Starfighters, The Details and more.

Meanwhile, 'German Measles Vol. 2': 'Sun Came Out At Seven' celebrates the beat scene's thrilling evolution into the converging realms of Mod, harmony pop, freakbeat and the first blossoms of psychedelia, as demonstrated by mind-blowing cuts from The Petards, The Dukes, The Ones, Tony Hendrik Five, The Rags and The Chosen Few and more. Not to mention Der Hund von Baskerville, Cindy & Bert’s sensational, revved-up take on Black Sabbath’s Paranoid.

Mastered from the original tapes and packaged with Bear Family's usual flair and style, complete with rare photos and track-by-track liner notes, 'German Measles'aims to spread this unique outbreak of Sixties sonic thrills to the world.