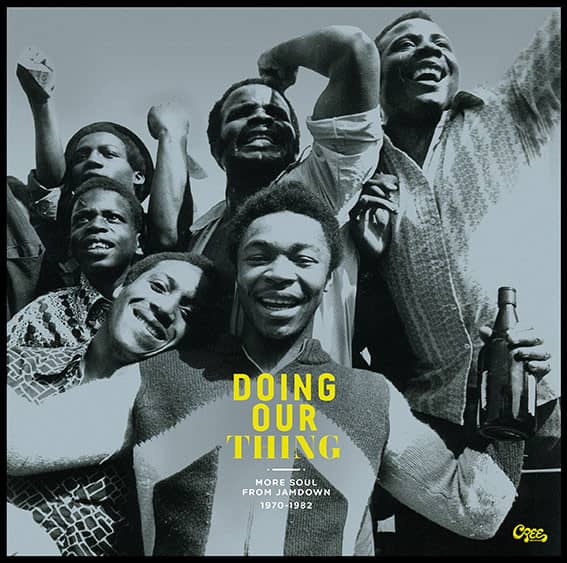 
Cover versions have always been an integral part of Jamaican music and an indication of the wide-ranging influences on reggae and the versatility and adaptability of its artists, musicians and producers in their approach to music making. Anything and everything could be, and has been, incorporated into the mix over the years but it is what reggae's artists, producers and engineers did with their sources that make their cover versions so special and so vitally important, in many cases their versions have travelled so far from their starting point that they are virtually unrecognisable. This set, compiled by reggae historian Steve Barrow, not only demonstrates the massive influence of American soul and disco releases on Jamaican music but also showcases the wholly original approach of Jamaica's musical maestros.

The track listing for 'Doing Our Thing' reads like a roll call of some of the best of Jamaica's greatest ever singers, deejays, musicians and producers and the selection opens with one of reggae's first ever artists to break into the international charts. In 1971 the inimitable Dave Barker, as one half of 'Dave &, Ansel Collins', hit all around the globe with 'Double Barrel' which was inspired by two American records 'The Funkie Moon' by Smokey Johnson &, Company and 'Party Time' by Ramsey Lewis. ,

Dave could sing every bit as well as he could deejay and both sides of his tremendous talent are featured here. Accomplished veteran vocalists including John Holt, Alton Ellis and his sister Hortense, BB Seaton and Junior Byles rub shoulders here with the magnificent musicianship of Augustus Pablo, Glen Adams, Willie Lindo, Lloyd Charmers, Cedric Brooks, Richard Ace alongside lessons from the Jamaican deejay school with Dillinger and the aforementioned Dave Barker. The set concludes with an example of the nascent dance hall style from Phillip Frazer, “sharp like a razor”, welding two hits from The Manhattans over the 'One Step Beyond' rhythm.

The music makers from Jamaica had always leaned on American, Cuban, and occasionally British, elements in creating their magic and, in doing so, attained their own voice whose worldwide reputation is out of all proportion to its humble beginnings and circumstances. Like the Jamaican people, whose motto is ''out of many, one people'', the roots of Jamaican music are embedded deep in the music of elsewhere but as its branches grew they too spread worldwide. ,

The subsequent repercussions have been of serious significance to the music of the past forty years. Its worldwide influence has long overtaken and superseded its origins: the massive sound systems, dub (the 'remix'); Jamaican MCs and deejays (rap). In fact, the whole transmission system of 'dance music' was pioneered in Jamaican dance halls, which are not 'halls' at all since most dances are open air affairs, where as Josie Wales says ''you could skank your life away…''. Both the vinyl and compact disc are accompanied by extensive contextual and historical sleeve notes from Steve Barrow and Noel Hawks and superb photographs from Dave Hendley. This release is respectfully and affectionately dedicated to Dave's memory and his insightful vision.