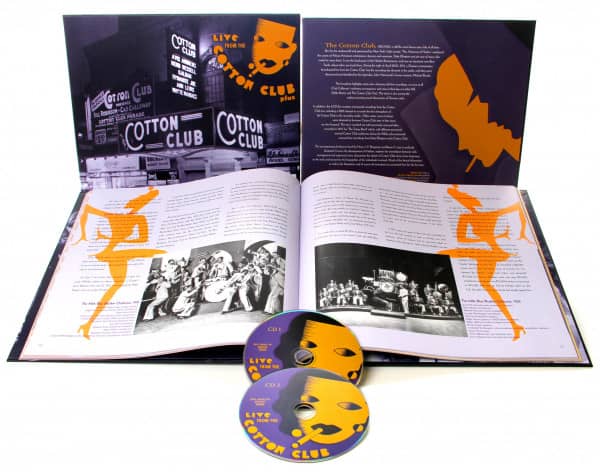 
The Cotton Club, 1923-1940, is still the most famous jazz club of all time. Run by the underworld and patronised by New York's high society, 'The Aristocrat of Harlem' employed the cream of African-American entertainers, dancers and musicians. Duke Ellington was just one of many who made his name there. It was the focal point of the Harlem Renaissance, and now an important new Bear Family release takes you back there. During the night of April 20-21, 1931, the German commentator Hellmut H. Hellmut reports live from the Cotton Club, but the recordings lay dormant in the vaults, until they were discovered and identified by the legendary John Hammond’s former assistant, Michael Brooks.
The broadcast highlights artists who otherwise left few recordings, or none at all (Cab Calloway's orchestra accompanies such stars-in-their-day as Lethia Hill, Eddie Rector and The Cotton Club Trio). The show is also among the earliest surviving sound documents of German radio.
In addition, the 2-CD-Set contains commercial recordings from the Cotton Club era, including a 1929 attempt to re-create the live atmosphere of the Cotton Club in the recording studio. Other artists, most of whom were destined to become Cotton Club stars in later years, are also featured. The set is rounded out with a previously unissued take, recorded in 1937 by The Tramp Band which, with different personnel, excited Cotton Club audiences during the 1920s, plus previously unissued live recordings from Duke Ellington at the Cotton Club.
The accompanying hardcover book by Horst J. P. Bergmeier and Rainer E. Lotz is profusely illustrated. It traces the development of Harlem, explains the interrelation between club management and organized crime, documents the details of Cotton Club shows from beginning to the end, and researches the biographies of the individuals involved. Much of the factual information as well as the illustrations and of course the broadcast are presented here for the first time.