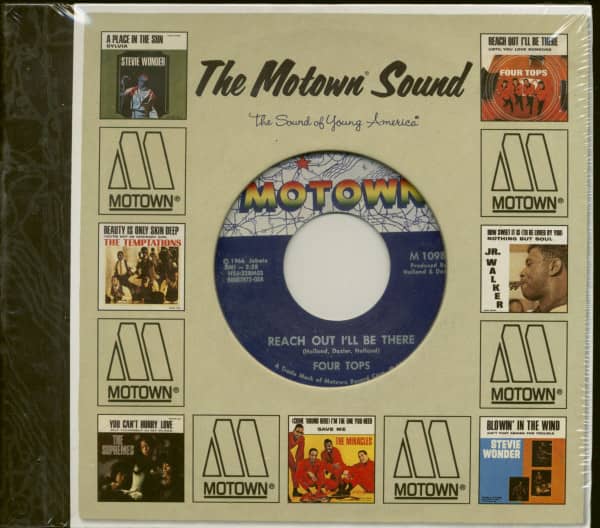 This article is deleted and can no longer be ordered!
P Secure bonuspoints now
Description
Learn more about Various
Review 0
Description
If you thought Volume 5 was the ultimate Motown singles box, bam! here comes Volume 6. This... more
Close menu

If you thought Volume 5 was the ultimate Motown singles box, bam! here comes Volume 6. This (once again) awesome set chronicles 1966, when 22 Motown A-sides reached the Top 20 and, quite remarkably, three-quarters of all Motown releases land someplace on the charts. This is the year “The Sound of Young America” becomes an official slogan. When H-D-H and their brothers & sisters in music and spirited competition are making more sophisticated strides. The Supremes have four no. 1 hits in a row – again. The Four Tops hit no. 1 with “Reach Out I’ll Be There,” what many consider the greatest Motown record ever. When new artists from the Isley Brothers to Gladys Knight & The Pips make some mighty Motown noise – and another new act, those crazy kids called the Mynah Birds, make a helluva rock ’n’ soul record but it gets shuffled aside. (Well, until now). The Complete Motown Singles, Vol. 6: 1966, the latest release in our acclaimed series, showcases the exploding success of the classic label on a 5-CD, 125-track set. It features the A-side and B-side of every single released by Motown and its subsidiary labels during the year, including several alternate pressings. This volume is highlighted by hits from the Tops, the Supremes, the Temptations, the Isleys, Stevie Wonder, Jimmy “Brokenhearted” Ruffin, Martha & The Vandellas and more. Also included are rare tracks by Tammi Terrell, the Spinners, Billy “Mr. B” Eckstine, Earl Van Dyke, Rick Robin & Him, the LaSalles and many more. Among the fascinating obscurities is “The Teen Beat Song,” Marvin Gaye’s ode to the Detroit Free Press. The release is the latest phase of a plan that extends through 2009, with Hip-OSelect. com issuing further volumes covering all of Motown’s single releases during its tenure in Detroit. The label moved to Los Angeles in 1972. As with all previous volumes, packaging for the set resembles a scaled-down 78-rpm-era “album,” with cardboard sleeves to hold each of the discs, and 112 pages of rare photos and extensive liner notes. Each box will feature an actual reproduction 45 RPM single of the Four Tops’ smash, “Reach Out I’ll Be There” b / w “Until You Love Someone.” (Yes, it plays!) Introducing the package is a vivid, personal essay by Motown songwriter (and former artist) Edward Holland, Jr., who remembers 1966 as his busiest year ever. “I was so strongly caught up in the moment that I didn’t fully grasp what was happening to me or around me,” he writes. “Motown was on warp speed. We were young and enjoying what we were doing so much. It was never like work in the first place.” Also included is a historical overview by Stu Hackel, a regular chronicler of Motown and soul music, who makes a strong case for Motown’s underappreciated political and musical influence. Track-by-track annotations have been written by noted authors and researchers Bill Dahl and Keith Hughes, with assistance by UMe VP Harry Weinger, who has overseen the series.