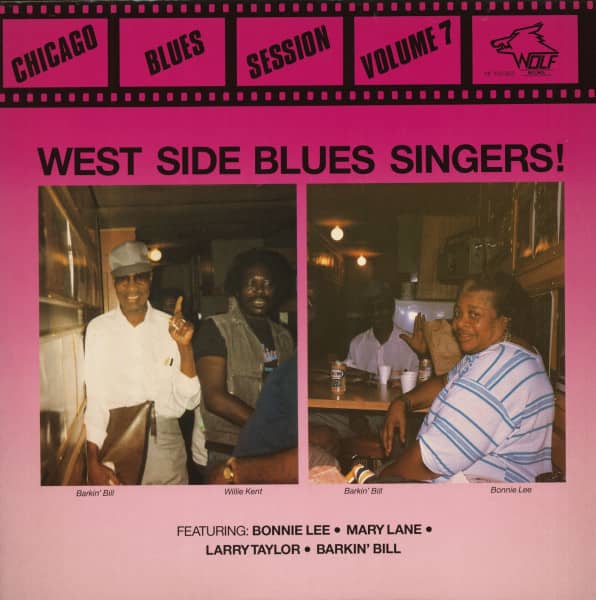 Born in Bunkie, Louisiana, in 1931, BONNIE LEE BOMBSHELL moved to the Windy City as a teenager. She soon became acquainted with local blues musicians.
In her hometown, she often listened to her parents' old records, most notably Bessie Smith's.
After familiarizing herself with the local Chicago blues scene, she soon recorded "My Mama Rocks Me With One Steady Roll" for the Ebony label. A brief collaboration with Sunnyland Slim and his band produced "I Got AThing Going On" on Slim's own Airway label.
She has a fast-paced and swinging style of blues singing reminiscent of Dinah Washington, Sarah Vaughan and Ella Fitzgerald, for whom she arranged a date with the Gatemouth Brown Band in the 1950s.
Bonnie lives in Chicago with her son Earl, a junior who plays running back for the Crane High School football team. "A lot of older singers have made it possible for us to get out and keep going," Bonnie says. "
If it wasn't for Koko (Taylor), we wouldn't be here today.
She helped all the ladies by giving us a good name."

MARY LANE was born in Clarendon, Arkansas, on November 23, 1935. As a child, she sang in several local church choirs. In Chicago, she began singing the blues through the encouragement of numerous musicians on the Windy City scene: Jr. Wells, Eddie Shaw, Morris Pejoe (whose "Hurt My Feelings" she interprets on this album), Howling Wolf and many others. These are her first recordings.

BARKIN' BILL claims to have "traveled to many places in and around the United States: Alaska, New York, Canada and many more, because blues is something that everyone has," he explains. Born in Cleveland, Mississippi, in 1928, he first began singing with the Glory Bound Quintette in Ruleville, Mississippi.
He later met famous bluesmen such as Elmore James, Memphis Slim, Big Joe Williams and Homesick James and soon moved to Chicago, where he lives today.

LARRY TAYLOR, son of the late Eddie Taylor, was "born into the blues" when the cream of Chicago blues gathered at his father's house to rehearse: Jimmy Rogers, Homesick James, Morris Pejoe, Johnny Jones, Floyd Jones and many more. Born in 1955 on the West Side of Chicago, his father gave him his start in music. Eddie played his son the records of Jimmy Reed, where Larry learned his drumming in the style of Earl Phillips, On this album Larry presents himself as a singer and pays tribute to his father on the classic "Bad Boy".