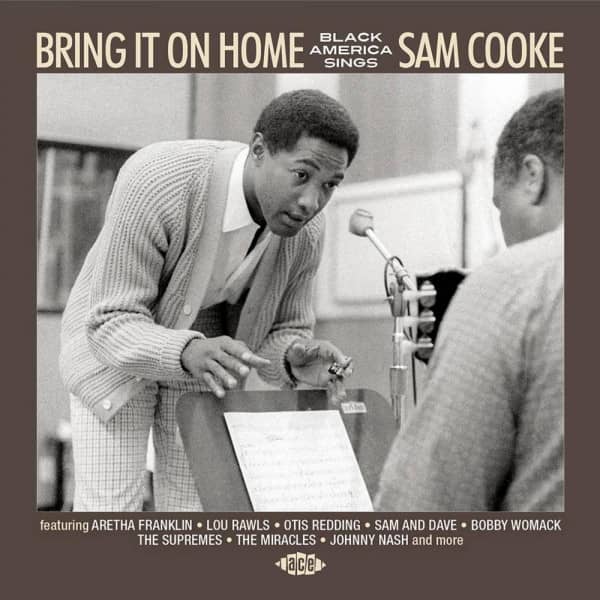 (2014/Ace Records) 24 tracks, playing time 65:52, 16 page booklet.
-
As compiler Tony Rounce points out in his notes, of the 35 R&B hits Sam amassed between 1957 and 1965, 25 were written or co-written by him, as were many of their B-sides, and he also penned quite a few numbers specifically for other artists. Several of the songs featured in this collection were hits for Sam, but here we are treated to ‘You Send Me’ by Percy Sledge, ‘Win Your Love For Me’ by Lou Rawls, ‘Love You Most Of All’ by the Persuasions, ‘Wonderful World’ by Johnny Nash, ‘Cupid’ by R.B. Greaves, ‘Bring It On Home To Me’ by Eddie Floyd, ‘Having A Party’ by the Ovations featuring Louis Williams, ‘Somebody Have Mercy’ by Willie Hightower, ‘(Ain’t That) Good News’ by the Supremes (with a rare lead vocal by Florence Ballard), ‘Good Times’ by Aretha Franklin, ‘Shake’ by Otis Redding and Brenton Wood’s version of ‘A Change Is Gonna Come’, Sam’s magnum opus. There’s also ‘The Sound Of My Man’ by Theola Kilgore, a ‘Chain Gang’ answer-song. Moreover, Sam ran his own record labels, SAR and Derby, from which this set boasts sides by Johnnie Taylor, the Simms Twins, Johnnie Morisette and Mel Carter. That’s Sam and colleagues J.W. Alexander and Lou Rawls singing the distinctive “hmm-hup-chala” backing chant on Johnnie Taylor’s ‘Rome (Wasn’t Built In A Day)’. Easier to spot is Sam as lead vocalist on ‘That’s Heaven To Me’ by the Soul Stirrers, recorded at his final session as a member of the group.(Mick Patrick)