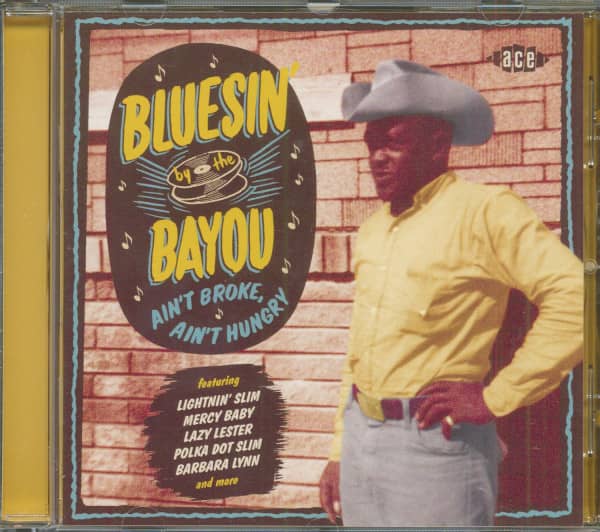 28 slices of down’n’dirty blues from the Deep South – including eight previously unheard tracks and takes.
The “By The Bayou” series leaps to Volume 18 with a return to the blues of South Louisiana, bringing you rare or previously unissued tracks from stars of the genre such as Lightnin’ Slim, Lazy Lester and Slim Harpo, plus a host of little-known or completely unknown performers. We also have two artists who you would never think performed in the downhome style – Barbara Lynn and Cookie (aka Huey Thierry) – but who sound right at home, with an unknown harmonica player setting the tone on Barbara’s track whilst Cupcakes guitarist Marshall Laday supports Cookie with some mean blues pickin’. In fact there are several tracks here that will have air-guitar virtuosos reaching for their imaginary axes.
We reveal in the booklet that the much-reported birthplace of Lightnin’ Slim may be another creation of this enigmatic performer. Sorting out the different takes of his songs has proven complicated because he was inclined to sing subtle changes in the lyrics whilst performing identical guitar work. This time we have had the support of a dedicated fan who prefers to remain anonymous but provided detailed analysis. As for Slim Harpo, ‘Cigarettes’ is one of my favourites amongst his lesser-known titles.
As always there are a handful of mystery singers. Was there really a “Ramblin’ Hi Harris”, for example, or was his name created later by J.D. Miller? Another rarity is an artist whose record doesn’t appear in that veritable tome The Blues Discography 1943-1970. T.B. Fisher may have escaped notice there but he is proof of what a great ear Huey Meaux had for all manner of music. The man had a real knack for spotting talent and bringing out their best on vinyl, and I’ll wager there will be many a blues aficionado hunting for Fisher’s disc once it’s been heard.
I sincerely hope that old and new blues fans will get as much pleasure listening to this CD as I had compiling it.
IAN SADDLER