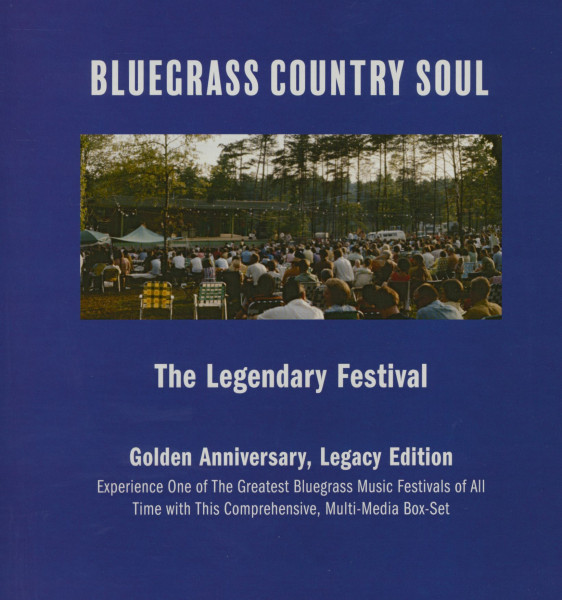 The box set contains over 7 1/2 hours of fascinating video and audio bluegrass music programming, plus a brand-new coffee table companion book, a magazine reprint, and much more, all stored in a handsome, custom-designed case. Inside, you’ll find:

1.    A choice of a standard DVD, a Blu-ray, or a Combo-Pack (a Blu-ray & a standard DVD), of Bluegrass Country Soul, the historic, feature-length documentary, restored in 4K, with newly enhanced Dolby Sound, and the wide-screen format in which it was originally shown in movie theatres.

PLUS the following, all new “Special Features:”

A.  An updated Commentary Track by bluegrass historian, and director of the 1971 Camp Springs festival, Fred Bartenstein

B.  A 30-minute documentary on “The Making of the First Bluegrass Movie” with members of the production team

D.  A 60-second Preview Trailer of the restored film

E.  A 40-minute audio interview with Bobby Osborne, reminiscing about the many innovations made by The Osborne Brothers

F.  A 30-minute audio interview with Robert White, aka Quail on the origins of The New Deal String Band

2.    A companion, coffee table book, 168-pages, with hundreds of color photos and anecdotes by musicians and filmmakers, including Ricky Skaggs, J.D. Crowe, Sam Bush, Bobby Osborne, Alan Munde, and many others

3.    Two CDs of “More BGCS Music” that was not heard in the movie. Volumes I & II contain 24 songs from the 1971 Labor Day Festival, featuring Del McCoury, J.D. Crowe, Cliff Waldron, The Country Gentlemen, The New Deal String Band, The Bluegrass 45, and The Wilson Brothers, along with stage announcements, and a portion of the 1971 “Muleskinner News” Award Show.

4.    Reprints of articles from the “Muleskinner News” from the summer and fall, 1971 issues with photos of the festival

5.    Reprints of an original flyer and a poster of Bluegrass Country Soul

6.    A recipe card for Brunswick Stew, sold at the festival refreshment stand

B. A Photo Gallery with production photographs and frames from the film


In 1971, the Washington Film Group, a new company of young filmmakers, shot a feature-length documentary at Carlton Haney’s 7th Annual Labor Day Weekend Bluegrass Music Festival in Camp Springs, North Carolina. The 3-day concert featured many of the elder statesmen of bluegrass: Earl Scruggs, Chubby Wise, Ralph Stanley, Jimmy Martin, and Mac Wiseman. The film captured performances by many of today’s top stars, when they were starting their careers: Ricky Skaggs, Del McCoury, Sam Bush, Tony Rice, and Doyle Lawson. Also featured are popular artists The Osborne Brothers, The Country Gentlemen, The Lilly Brothers and The New Deal String Band. The festival had a number of surprises, such as a visit by country music legend Roy Acuff and his Smoky Mountain Boys, a fiddle jam, and a young group from Japan, The Bluegrass 45. The film climaxes with a stage full of banjo players performing “Foggy Mountain Breakdown” with Earl Scruggs. The Washington Post film review called Bluegrass Country Soul “A New High.”

After a limited theatrical release in 1972, Bluegrass Country Soul virtually disappeared. Producer-Director Albert Ihde continued to look for national distribution, and a video release, to no avail. An unauthorized “pirated” VHS cassette of the film was widely circulated among bluegrass fans for years. Then, in 2006, Time Life Music released a DVD of Bluegrass Country Soul that received national distribution and sold out its run. However, the DVD was not distributed overseas where bluegrass is popular, particularly in Japan and Europe.

Recently, facing the threat of the sole surviving 35mm print fading away and being lost for all time, Ihde and his original partners took up the challenge of restoring the film. On November 2, 2019, during a ceremony at a special screening, a DCP (digital cinema package) of the newly restored film was donated to the permanent collection of the Bluegrass Music Hall of Fame & Museum in Owensboro, KY. Sales of the new, comprehensive box sets will help to defray the cost of the film restoration and the archival donation.

The year 2021 will mark the 50th anniversary of that incredible Labor Day festival, and this project will commemorate the many musicians who participated and contributed to the growth of bluegrass music. A percentage of the profits from these box sets will be donated to the International Bluegrass Music Association Foundation’s Trust Fund in the names of all the musicians and filmmakers involved.