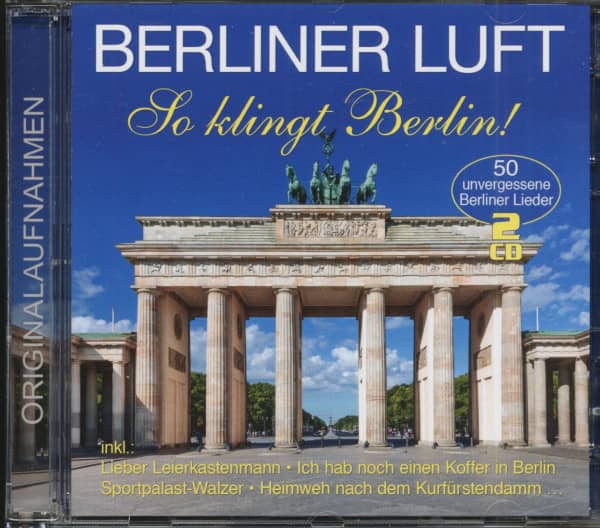 (MusicTales) 50 Tracks - 1935-1962 - Unforgotten Berlin Songs -
Berlin, the old and new capital, is for many the most interesting city in Germany.
The city tells of its eventful history from Prussia to the Empire, the Weimar Republic, the Third Reich, the division after the war, the blockade and reunification to the new capital of the Federal Republic.
Berlin has always been the cultural centre of the country in all epochs. Berlin produced many renowned artists and Berlin originals, which made the typical Berliner famous beyond the city limits.
Berlin, these are the districts from Charlottenburg to Zehlendorf with Brandenburger Tor and Alexanderplatz, Berliner Weiße with Schuss, Molle, Schrippe and Bulette and above all the Berliner Currywurst.
In the Berlin songs of all generations the "Berliner Schnauze" is heard, as well as the unrestricted love of its inhabitants for their unique city.
This double CD offers you a musical journey through old Berlin, full of local colour and joie de vivre.