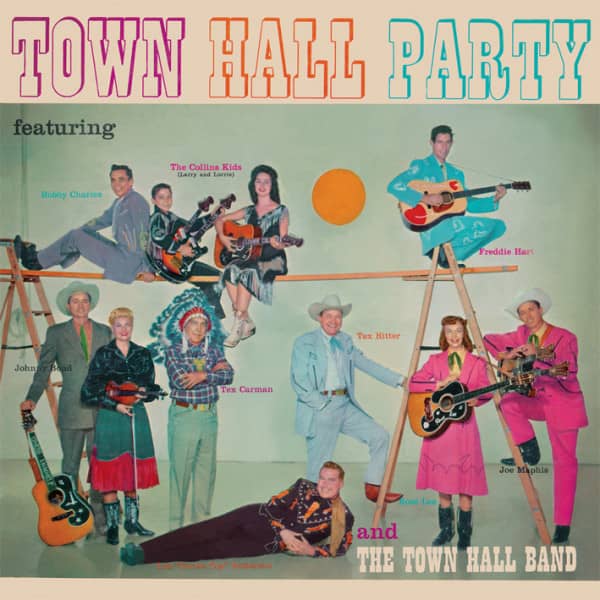 Although Nashville was fast establishing itself as the commercial home of country music, the West Coast had a vast, ready audience for such a show. The area had first became the new home for the Dust Bowl migrants of the 1930s and, a few years later during the war years, a further influx was made up of workers seeking jobs in the munitions and defence plants. These were all people who loved country music and, consequently, a brand new country scene was born with its own sound, artists, clubs, record labels, radio shows and, in due course, television programmes.

'Town Hall Party' was created with its own cast of regular performers and musicians, boasting a house that was virtually a 'who's who' of the West Coast scene comprising such as such as Joe Maphis,
Merle Travis, Skeets McDonald, Johnny Bond and Tommy Duncan. Jay Stewart (who later hosted the TV quiz show 'Let's Make a Deal'), and Tex Ritter were the MCs. The weekly show presented an equally impressive guest list, attracted both by the show’s tremendous popularity but also by the fact that fledgling television was becoming a vitally important media for exposing their talents to brand new audiences. Among the many guests to appear included Johnny Cash, Patsy Cline, Eddie Cochran, The Collins Kids, Freddie Hart, Wanda Jackson, George Jones, Merle Lindsay, Bob Luman,
Carl Perkins, Jim Reeves, Marty Robbins, Hank Snow and Gene Vincent.

With an audience numbering up to 2000, 'Town Hall Party' was first broadcasted live over local radio station KFI, but reached a greater audience when NBC syndicated the show on radio. The broadcast was extended to three hours when KTTV-TV televised the show. The show was so popular that, in 1958, Columbia Records issued the 'Town Hall Party' album featuring various cast members.