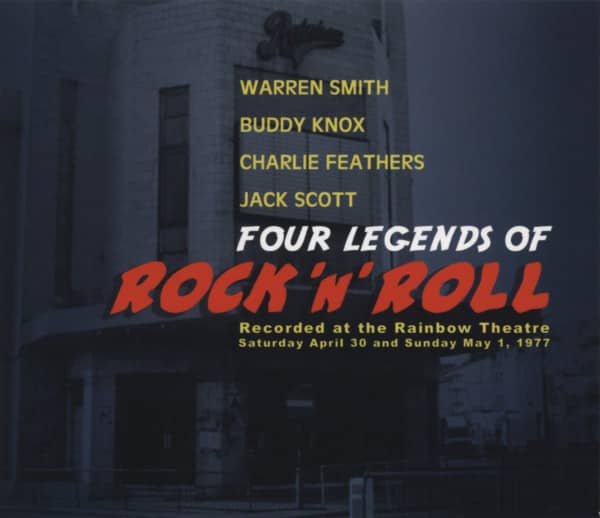 •    One of the most amazing Rockabilly and Rock 'n' Roll shows of all times!

It all seemed so unlikely when the news came of the 'Sun Sound Show' to be held at North London's Rainbow Theatre starring Buddy Knox, Charlie Feathers, Warren Smith and Jack Scott. Despite two of the artists having no connection with Sun Records this was truly a dream line up. But would it, could it really happen? The questions were answered on April 30th 1977 when a near full house gathered for what was to prove an epic night of Rockabilly and Rock 'n' Roll. The atmosphere was electric and the anticipation high.

Buddy Knox had already become familiar through his earlier visits to the U.K but there was some surprise at his appearance when he took to the stage, his permed hair do and flared trousers being at odds with most of the audience. Buddy's act was slick, polished and just a little disappointing.

Rockabilly legend Charlie Feathers received a rapturous reception which almost seemed to overwhelm him, making him seem nervous and his act hesitant, but the unique Feathers voice still shone through, most notably on the earlier Sun material such as Peepin' Eyes on which the audience was willing to join in on the chorus. It took a while for the fact that we were seeing Charlie Feathers here 'live' in London to sink in.

Much the same applied to Warren Smith a true star of Sun Records. Here at last was the real deal and the ecstatic audience rose from their seats to give him a standing ovation before he had sung a note. The fact that he was here and looking just like Warren Smith was enough for most of us. Whilst clearly bemused by his reception Warren rose to the occasion to provide a storming set of his Sun classics. There were times when Warren looked almost as surprised as Carl Perkins had been on the same stage when making his UK debut in 1964. Clearly surprised at the audience reaction Warren apologized for being unable to remember some of the numbers being so enthusiastically requested and promised to learn them all should he make a return visit. I was lucky enough to speak to Warren outside the theatre after the show and he was still shaking his head in surprise at the warmth of the reception and enthusiasm for his Sun catalogue. A friendly and humble man.

Jack Scott had enjoyed several chart hits in Britain during the 1950s and 1960s and so also received a warm welcome as he prowled on to the stage for a wonderful set of his well known Carlton and Top Rank numbers. A tough, muscular man with an unfamiliar beard Jack had a great stage presence and created an atmosphere of tension and excitement. Here was a true professional at work.

It had been one of those not to be missed occasions, and most, if not all of us returned to the Rainbow for the following night's show where, with opening night nerves largely conquered we enjoyed another unforgettable evening with the four rock 'n' roll legends. For those who may have been too young, or who simply couldn't be there, this CD will give an idea of the excitement of the occasion, and for those who were there, a reminder of two memorable nights and of how lucky we were. Legendary indeed.

The excellent notes tell the story in much more detail, and as is usually the case with Bear Family, the booklet is worth at least half the price of admission, or more, and yes it does include some photos from the show.
Blue Suede Shoes # 102 Marc Bristol