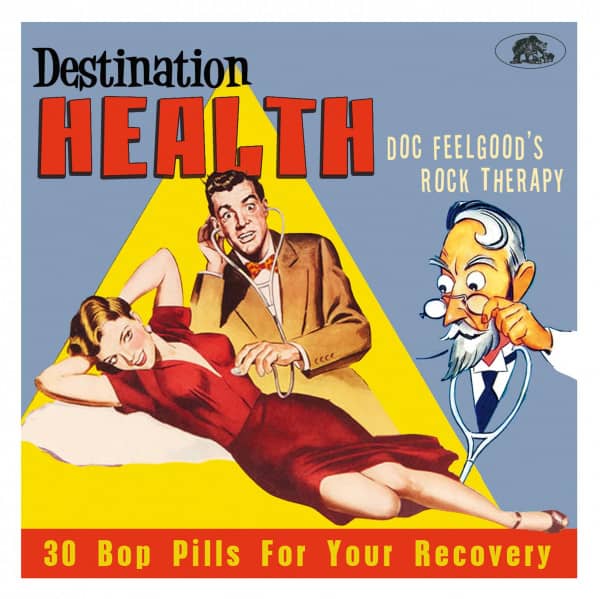 1-CD with 28-page booklet, 30 tracks. Total playing time approx. 74min
• A compilation of acoustic vitamins against viruses, germs, depression and hamster buying, made with confidence, sense and love!
• Stay at home and listen to more music! Doc Feelgood's Rock Therapy is the ideal home remedy!
• We present 30 bop pills from four decades how to defy and prevent diseases. Not only our ears are happy about a whole series of rarities, as music helps to survive crises!
• Of course, besides rarities there is also the non-plus-ultra from this category, the title song by the Johnny Burnette Trio, plus Carl Perkins, Bo Diddley, Louis Jordan, up to the one man band of the legendary Hasil Adkins, Huey 'Piano' Smith's Sinus Blues not to forget!
• Besides good rock 'n' roll of the particular category, orchestral recordings are also featured. For example the theme from the TV series 'Medic' by Les Baxter, Noro Morales with an extremely rare mambo recording from Colombia. In addition Woody Herman delivers the Doctor Jazz!
• Plus, there are legendary blues and R&B tracks, such as those by Floyd Dixon, Little Willie Littlefield and the legendary Boogie Disease by Doctor Ross, as well as rarities by unknown artists such as Dennis Bell, Joey Nepote, and The Mysterions, who live up to their name. Hits and rarities are combined here. The rarities predominate, many of them for the first time on CD!
• Song-by-song notes by Bill Dahl are included in the richly illustrated 28-page color booklet!
The Current Background
Medical disasters, pandemics and epidemics exist at least as long as living beings inhabit this planet. And since music has been around, songs have been made about diseases and their treatment. One thinks of medieval minnesongs against plague and cholera or the TB Blues, which is about the treacherous tuberculosis and was already sung on the cotton fields of the American South before the first sound carriers could be technically produced.
Today, in the year 2020, we must confront the Corona Virus, which causes fear and anxiety to many. This gave us the idea to musically refer to the medical history with this idiosyncratic compilation and at the same time to encourage. From our own experience we can report: Music is definitely therapy against fear and worries!

The Musical Retrospection
Besides the listening pleasure, which acts like a vitamin injection, you will be musically taken on a medical journey through time, which chronologically begins in 1939 and ends in 1965. Some of the songs deal with the topic in a thoroughly humorous way and make you smile. Very rare titles and nostalgic popular songs alternate. Everyone still knows Boppin' The Blues by Carl Perkins or the Doo-Wop-laden Call A Doctor by the Crows! Some rare recordings have been released here on CD for the first time! Among them Noro Morales' mambo-instrumental Vitamina and The Mysterions' Amnesia! Many more rarities in this compilation will raise morale as well as a number of blues and R&B artists will do so. Among them Little Willie Littlefield, Louis Jordan with his incomparable Rock Doc, Floyd Dixon and Doctor Ross!

​Covid-19 is raging worldwide and is causing a pandemic with a huge number of victims. What we need is a good rock 'n' roll and blues based treatment. And this compilation released by Bear Family proves that it works.
‘30 Bop Pills For Your Recovery’ is the subtitle of this album and confirms once again that ‘Destination Health, Doc Feelgood's Rock Therapy’ is the ideal medicine to help you through the corona crisis. Definitely recommended!

This CD made my day! Strange times we're living in but that one really cheered me up! Thank you Bear Family!

$92.30 *
Show all "Various Artists" articles
Presse Archiv - Destination Health - Dr. Feelgood's Rock Therapy - keys and chords
Presse Archiv - Destination Health - Dr. Feelgood's Rock Therapy - medien-info Covid-19 is spreading wildly around the world and is causing a pandemic with a huge number of victims. Staying in Our Room' was the message, something we could hardly imagine a while back. Fortunately, we have often experienced that music has a healing effect. Even in the past, illnesses have made masses of victims, just think of tuberculosis, cholera, the Spanish or Asian flu. In those days too, artists were inspired by this and composed songs that had a therapeutic effect, as it were, to ward off the crises. That's what brought the brilliant Bear Family label to the idea to bring this 'Destination Health, Doc Feelgood's Rock Therapy' on the market. Next to the vitamin boost this album undoubtedly gives you, we also make a musical trip. This compilation contains next to 'good old rock 'n' roll' by top artists like Johnny Burnette & The Rock 'n' Roll Trio's 'Rock Therapy' or Carl Perkins' 'Boppin' The Blues', also a number of formidable blues and rhythm & blues tracks by a.o. Floyd Dixon, Little Willie Littlefield and Doctor Ross, here with the legendary 'The Boogie Disease'. It's also interesting that there's a lot to discover here. Lesser-known artists like Dennis Bell with the cheerful 'Quarantine', or Joey Nepote begging for a 'Doctor, Doctor, Doctor' while rocking. Beautiful and compelling is the instrumental 'Medic', the theme of the T.V. series of the same name, by Les Baxter & his Orchestra. Another nice instrumental language is certainly the mambo-tinted 'Vitamina' by Noro Morales. And as it has become a tradition with Bear Family, this album contains another 28 colour illustrated booklet, compiled by Bill Dahl, with not only a lot of information about the artists and the songs, but also beautiful retro looking drawings. 30 Bop Pills For Your Recovery' is the subtitle of this album and confirms once again that 'Destination Health, Doc Feelgood's Rock Therapy' is the ideal medicine to help you through the coronacrisis. Highly recommended!
30.05.2020
Presse Archiv - Destination Health - Dr. Feelgood's Rock Therapy - Now Dig This
Presse Archiv - Destination Health - Dr. Feelgood's Rock Therapy - Now Dig This We get a glimpse of both sides of Sun in Macy Skipper's rockabilly number. 'Bop Pills', and Doctor Ross with his riotous blues, 'The Boogie Disease'. As ever with such a compilation, there are a few duffers. The McGuire Sisters' homage to sneezing and Richard Allen's Doctor In Love' are square, Woody Herman is jazz, Les Baxter is pure pop and while Lonnie Miley's 'Satellite Fever - Asiatic Flu' is rockabilly, it's no great shakes. Hasil Adkins is an acquired taste that so far has proved beyond my palette and his 1964 Jody recording, She Said', hasn't changed things. So, while I wouldn't exactly say that it was just what the doctor ordered, there's probably about enough good stuff to keep you entertained until we're allowed outside again. Incidentally, there's no overlapping of tracks with Lonesome Lonnie's Lockdown list in last month's issue. Shaun Mather
15.07.2020
Similar products Customers also bought Customers also viewed
Similar products
Various - History: Destination Moon - 50 Years-First Man On The... Art-Nr.: BCD17527