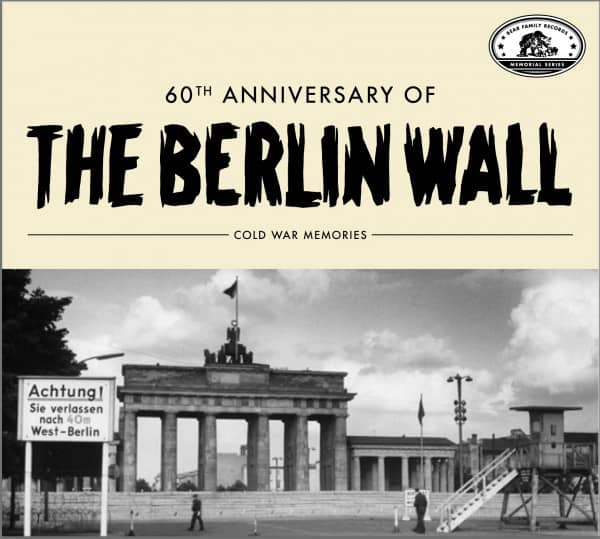 1-CD Digipak with 36-page booklet, 34 tracks. Total playing time approx. 79 min.
Cold War Memories
The arms race between East and West had already begun toward the end of World War 2. In order to end the war in the Pacific and to avoid a loss-making invasion of Japan, the US military demonstrated its power by dropping two atomic bombs on Hiroshima and Nagasaki - for the Soviet Union and its vassal states a clear signal of US military strength.
The demarcation line between the Soviet and Western Allied occupation zones stretched lengthwise through Germany, which thus became the deploying area for a military conflict that was growing more likely. In order to stop the unbroken flow of refugees from the GDR to the West, and on the instructions of the Soviet Union, work began on August 13, 1961 on the Berlin Wall and the fortification of the 1378 km long German-German border. The Cold War experienced another stage of escalation. In Berlin, Soviet and Western Allied tanks faced each other directly.
To document the feelings of the people - here from a Western Allied point of view - we go back to 1949 and the foundation of two German states under the control of the USA and the Soviet Union. With the politically manifested division of Germany, the preliminary history of the construction of the Wall began. What did it feel like to be locked up and locked out? On the other hand, what was the Communist hunt in the West like? What did the G.I.s in Germany expect and feel? Here are the answers!
Songs, music and sound documents
We've gathered mostly American but also English and German recordings on the subject, backed up by historical audio documents that include radio recordings, newsreel soundtracks, John F. Kennedy's CONELRAD statement, and the now-famous quote from a press conference where G.D.R. head of state Walter Ulbricht spread the lie "No one has any intention of building a wall." For their part, a series of excerpts from 1961 AFN (American Forces Network) broadcasts from Berlin document the culture and feel of the era and provide insight into the station's propaganda function as well.
Musically, we go back to 1949, when both German states were founded - documented here by the first recording of the GDR national anthem. The beautiful melody may evoke ''Eastalgic'' feelings, but here it is meant to stand as a memorial to the events.
The communist hunt taking place in the U.S. at the same time is underscored by songs from Little Jimmy Dickens, The Kavaliers, and Lulu Belle & Scotty. Comedy was a propaganda ace up the USA's sleeve. Thus, countless so-called novelty records were released on the subject. We have selected the catchiest ones, including Dickie Goodman's 'Berlin Top Ten', Spencer & Spencer's 'Russian Band Stand'. Bo Diddley addresses 'Mr. Khrushchev' directly. In 1961, rock 'n' roll was still ''in'', as evidenced by 'Rockin' Behind The Iron Curtain'. Miss Toni Fisher hits the nail on the head with 'West Of The Wall'.
In addition, other Cold War themes are touched upon, such as espionage, the feared nuclear missile attacks, and the threat of World War III, which was just averted. There are a few German recordings as well. Marlene Dietrich, for example, still has a suitcase in Berlin and the dance orchestras of Kurt Edelhagen and Hazy Osterwald deal with the subject instrumentally, while jazz greats like Dave Brubeck and Benny Goodman find themselves at the 'Brandenburg Gate' and in the 'Mission To Moscow'. From a purely musical point of view, just a fine music selection, but embedded in a serious and threatening political background.
A great piece of German history - a great piece of world history!