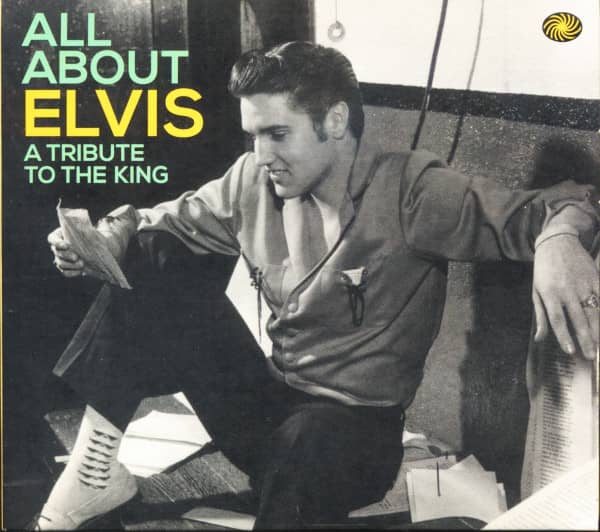 Various: All About Elvis - A Tribute To The King (3-CD)

It’s that 'Elvis' phenomenon that is thoroughly explored on 'All About Elvis - A Tribute To THe King' Its 97 tracks, dating from 1954 to 1962, were recorded by Elvis’s contemporaries.
CD1 'Elvis Style' rounds up recordings sung in the style of Elvis, including contributions by Conway Twitty, Ral Donner, Roy Orbison and Sleepy LaBeef.
CD2: 'Elvis Songs' comprises songs associated with Elvis, featuring the likes of Carl Perkins, Ricky Nelson, Buddy Holly, Johnny Cash, Wanda Jackson and Eddie Cochran. Bobby Bare aside,
CD3 'Elvis Adored' has the least familiar names as all manner of artists rushed to sing the praises of The King. Manager Colonel Tom Parker was a prolific licensor of lucrative Elvis merchandise, including badges, combs, dolls and key chains, and he was also a ruthless protector of copyright, so many recordings that traded on brand Presley were quashed or pulled from release at his instigation. But enough reached the public to offer a treasure trove of Presleyana. We hope you enjoy our quirky trawl through the early years of the Cult of Elvis and this idiosyncratic selection of recordings which span the Novelty Pop, Country, Rhythm 'n' Blues and Rock'n'Roll fields!

Article properties: Various: All About Elvis - A Tribute To The King (3-CD)